Yet another post on a BLCC anthology. Hey, they're the ones that are easiest available featuring old-timey stories, so it's not that strange that they feature heavily on this blog. This was published in 2016, so it's one of the older ones, which means that Edwards had a full range of stories to choose from in producing this volume.

This one is subtitled "Countryside crimes", which also means that I am less inclined to be annoyed that the stories aren't mysteries... As you can probably gather, this means that the theme of this anthology is stories with a rural setting. We get the usual assortment of authors, some very famous, some who have fallen out of favour, and some who never became household names at all. To be honest, this probably has the highest rate of heavy hitters compared with unknowns of all the BLCC anthologies I've read so far. 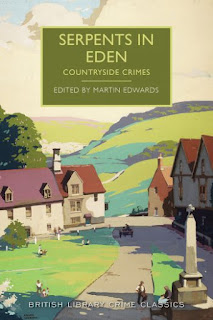 A doctor with an unknown past has moved into the small village Bishop's Crossing, and soon he is engaged to be married to a young lady from the nearby Leigh Hall. But late one night, he seems to have received a visitor, since several witnesses have heard him arguing and calling loudly. And the next morning, he is found dead in his study...

I'm in two minds about this one. The solution involves something that is generally looked upon as a bit of a cheat, but Doyle writes deftly and keeps the story going. There's no Sherlock Holmes in this one (since it was written while he was temporarily "dead"), and it's even less of a mystery than those stories. On the whole, I suppose it's passable.

G. K. Chesterton - The Fad of the Fisherman

Sir Isaac is found murdered after having been in a secluded spot, fishing away.

Another heavy-hitter with a story not featuring his most well-known detective. This one instead uses Horne Fisher, but this might as well have been a Brown tale, there's very little to distinguish it. The first few pages are quite bewildering, and there's no detection - Fisher just tells us what happened, without us really getting to know how he would know that.

Philip Trent meets two visiting Americans, and is told about the fortunate find they made while having a drive in the country. They came across a quaint old church and its vicar, and while there managed to acquire a mediaeval tabard that is quite unique. But Trent is not so sure.

So, this one at least features the author's most famous creation. Bentley wrote a couple of fine short stories, but this one only ranks somewhere in the middle. It's an all right read, but there's not much detection, things just unfold as the story meanders along.

This story tells the tale of Malcolm Sage who's investigating a case where a curate in a local church is being suspected of being a poison-pen letter writer.

I have to wonder if this tale is actually just an excerpt from a novel, because some of the writing here is very hard to follow otherwise. The first six or seven paragraphs have no bearing at all on what follows, and there are some things that are implicitly understood as if they've been explained elsewhere. That doesn't matter much though, because the story isn't much to talk about anyway. It's quite run of the mill with a fairly obvious culprit. More melodrama than mystery.

Reggie Fortune investigates a case where two scientists - man and woman - have moved out into the countryside and are being followed in different creepy ways. But as Fortune immerses himself more into the mystery, he becomes convinced that there is more to the story than just a simple case of persecution.

This story - as usual with Bailey, it's a fairly long one - is really a tale in two parts. The above description only applies to the first half, but then the whole thing veers off in a different direction (though Fortune seems to have had his suspicions from the very start). It's not a fair play story in any sense, not one of Bailey's better efforts.

Dr. John Thorndyke has been approached by the brother of a man who's been found drowned in a ditch. The question now is if the whole thing is really a suicide, as it appears, or something more sinister...

A very typical Freeman story where we follow Thorndyke's scientific findings which slowly but surely unveil the whole picture for us. It's only tangentially a fair play story, because while (some of) the clues are signalled, there's really no way that we readers can solve this thing along with Thorndyke. An okay-ish read, on the whole.

Farmer Mr. Light put his cows out to graze, but somehow they managed to get through the enclosing and destroyed a whole set-up of lots that were intended to be judged on at the following day's Flower Show.

A misnomer, because this ain't no mystery at all. It's just an amusing countryside vignette. Fun, but very inconsequential. (No, there's no Albert Campion in this one.)

As Roger Sheringham is bringing forth his wisdom on evidence, he is called on by a young lady whose brother has been arrested on suspicion of murder. It seems that the brother was having a sort of dalliance with a married woman, and several witnesses saw him drive up in his car and beat the woman to death.

This is yet another Berkeley winner. As Edwards points out in his foreword, Berkeley wrote a variant of this story which was published elsewhere as "Double Bluff" (in the collection "The Avenging Chanee"). I've read both, and I think both are very worthwhile. The entire setup is the same in both stories, "Double Bluff" only differs in introducing another character. In both cases we get very fine examples of fair play mystery writing. Do seek out the alternative variant if you have the opportunity, just to compare the two.

A man has been killed in his manor, and his nephew becomes the chief suspect as he was on the premises at the time and it was well known that there had been words between the two before. But at the inquest, new evidence is introduced...

The obscurest of writers here (since she only wrote this one story), I had actually read this before - it was published in a Swedish anthology from the forties. It's not a fair play mystery by any means, but I sort of liked it anyway. This is more of a courtside mystery (or an inquest, as the title tells us), but unlike many of its ilk it has no negativity, no pessimism, no nasty sting in its tail. It's as cheery as a story about a murder can be, really. And I like that.

A woman was terrorized by a man who attempted to kill her and was put in a mental institution. Now, he has escaped, and the woman who lives with her mother on a remote farm is alerted to the danger. As the suspense rises, the scarecrow she built just days before takes on a more sinister appearance...

You know my opinion on White's stories by now - they're well written and all, but I have no time at all for this type of story. Psychological suspense may be my least favourite mystery subgenre.

Leo Bruce - Clue in the Mustard

Sergeant Beef relates the first important case he worked on, where an elderly lady has been found dead in her garden. Everything points to death of natural causes, but Beef has noticed one or two things that makes him suspicious.

This isn't completely fair play, because the most important clue - the one in the title - isn't really shown to the reader. Otherwise, this is a perfectly fine short short. Bruce is quickly becoming a favourite of mine.

A man is killed during the morris dancing segment of a pageant in a quaint English village. There is an obvious suspect, but he was not a part of that segment, so how could he have done it?

There are some similarities between this and Allingham's contribution to this collection. It's a bit of silly fluff, very short and ends before overstaying its welcome.

This starts off quite lackluster, but picks up a bit towards the end. The Berkeley and Bruce stories are the two standouts, and there was nothing that was truly bad here. There's only the White story that didn't work for me at all, and that's simply because of my preferences, not because White wrote a bad story.

So, distinctly average in nature, but nevertheless not disappointing, and as I said, a couple of tales to make the collection a worthwhile purchase. If this is because it contains a higher concentration of stories by more celebrated writers or not is hard to say. Out of the two truly obscure stories, one was better than average and the other was worse...

1. Miraculous Mysteries - no surprise there, this is an impossible crime anthology, so it has lots of things going for it that elevate it above all the other collections.
2. Silent Nights - the quality of the collections from here on is fairly uniform, but I think this one just manages to go to the top. A good variety of stories and a few really good ones.
3. Blood on the Tracks - a collection with few standouts and some truly bewildering inclusions, but on the whole it was still a worthwhile read.
4. The Long Arm of the Law - starts off spottily, but gets better and better, and even though it finishes with one of the worst stories I've ever read it's still distinctly above average.
5. Serpents in Eden - the very definition of average with two highlights and no real disappointments.
6. Crimson Snow - a rough start and ending to this anthology belies the fact that it collects a solid bunch of stories, perhaps only marred by the fact that there is no true highlight here.
7. Continental Crimes - a disappointing read on the whole where the great stories are few and far between.
8. Resorting to Murder - there's a bunch of easily forgotten stuff here. But also one awesome story that means that it manages to avoid being placed last.
9. Murder at the Manor - I was thoroughly disappointed that this didn't feature any true country house mysteries. I think there was one fair play mystery among the whole bunch of stories.

Over at Mysteries Ahoy, Aidan had a bit more time for this collection than I did. And both the Puzzle Doctor and Kate at crossexaminingcrime really seemed to like it a lot.
Posted by Christian_Henriksson at 19:50