Another recent anthology, this time from Tony Medawar, a major genre aficionado and generally excellent att discovering unknown and forgotten stories by authors in the mystery field. This book collects a number of such discoveries, all from major names in the genre.

Most of the stories are from the 20s and 30s, with a couple of exceptions, and were written in the respective author's heyday. So, even though these stories had been forgotten by history, there should be some hope that their quality is up to snuff. 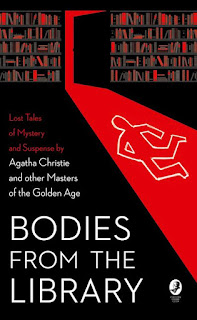 Sir Clinton Driffield is visiting his old friend Squire Wendover over the weekend. Wendover reveals an ulterior motive to his invitation when he tells Sir Clinton that he is expecting a visit from a nurse who's suspiciously been named as the heir of a young man who'd been nursed at a nursing-home in France but died recently.

This is a fairly run-of-the-mill 20s mystery story, but Sir Clinton is a nice enough character and the story moves along at a fair clip. It's not really fair play, but the explanation towards the end gives the reader a good surprise. In all, not bad at all.

Sergeant Beef tells the story of one of the bloodiest murders he came across - a case where an elderly lady was bludgeoned to death in full view of her crippled sister. She is adamant that the killer, clad in the titular cape, was their ne'er-do-well nephew, but it turns out that his cape was being mended at precisely the time when the murder occurred.

A clever tale by Bruce with a kinda, sorta impossible slant. The explanation isn't the most surprising I've ever read, but it's a solid tale by a recent favourite of mine.

A solicitor decides to murder one of his clients when the latter decides to realise some of the assets that the solicitor was handling for him. The murder takes place on the river, in a rowboat, after the victim had been visiting him, and the solicitor takes great pains to avoid leaving any clues to the murderer's identity.

A very short inverted tale by Crofts, where Inspector French only appears for a handful of paragraphs towards the very end. Another one of those where the murderer overlooks a simple thing. Not really what I want to read, but when the story's so short I don't mind its inclusion.

A young police officer, Roger Linckes, is sent to investigate how the contents of some important government papers managed to escape into the hands of a foreign power. He is sent to interview several of the respectable officials that had been handling the papers.

More of an adventure thriller than a mystery, and very typical of the twenties. The "surprise" of the solution isn't much of one, and disappointing to boot. Luckily, Heyer has a writing style I enjoy, so it wasn't all a complete disappointment.

A shipowner has invited a detective - Nigel Strangeways - to his yacht for a family trip, without really telling him what it is he is supposed to investigate. Once they are on their way, a message comes over the radio that an escaped convict may have stowed away on the ship, and when the shipowner is found dead the next morning, Strangeways needs to find out what actually happened.

This is a play, not a prose story, and there are some impossible elements to the situation as well. This was a story I really enjoyed. I can't say that the solution is particularly surprising, but it's told well.

Dr. Priestley is alerted to a case where a man has been found dead on a train as it arrived at its final destination. The victim was struck by the ubiquitous blunt instrument. As his nephew was travelling on the same train and also had motive to kill his older relative, the police are wont to suspect him, but Dr. Priestley has other ideas...

Hm. If you noticed the title above, you'll probably guess that the wound from the "blunt instrument" was in fact a gunshot wound. The police investigation can't have been very impressive... Anyhoo, this was a bit of a disappointment. There's just a bit too much coincidence in the whole thing, and yet I never really felt any sort of surprise along the way.

Young Hilary Smyth has run through his entire fortune and has taken residence with his elderly aunt. And as she is rather poorly and has no valid will, Hilary has decided to help her along the way to her final resting place.

One of those all too common inverted stories with a sting in its tail at the end. Not my thing at all.

Vincent Cornier - The Girdle of Dreams

An old woman has come to Mr. Lionel Blayne's jeweller's firm to sell a precious girdle, created by famous artist Benvenuto Cellini. She is not willing to divulge any information on how it came in her possession, but convinces him to store it in the store's safe. But as he opens it to put the precious girdle inside, he is overcome by a lightness. And when he comes to his senses again, the safe has been emptied...

Arthur Upfield - The Fool and the Perfect Murder

Australian Detective Inspector Napoleon Bonaparte is investigating a case where an outback rider has vanished from his post, with no traces of him left.

Medawar sees fit to warn us readers about some of the language and descriptions in this story, but I think that warning says more about our times than about those when the story was written, because I felt there was very little to hurt my sensitive nerves here. As for the plot and the story itself, it's a bit so-so. It's an inverted mystery, so that's immediately a minus for me. Otherwise, it's an interesting setting to read about and Bony is a nice enough character to follow.

A. A. Milne - Bread upon the Waters

This is the story of a young ne'er-do-well who wants to get rid of his rich uncle, and concocts a plot in order to succeed (and still inherit).

This is really plot template 2B of the inverted mystery, but it has one excellent thing that makes it stand out a bit, and that is the breezy style in which it's written. The plot hatched by the young miscreant is quite clever, and the final twist is at least a bit amusing. So, probably the inverted mystery I've enjoyed the most for quite some time.

Anthony Berkeley - The Man with the Twisted Thumb

A young lady who's come into a bit of money and has some leisure time travels to Monte Carlo where she runs into a young man who tells her a similar story of his own. And then they bump into a couple of shady characters outside the casino, who are after a handbag that the young lady seems to have come into possession of by mistake.

This is very much not a typical Berkeley story - it's another twenties style romantic adventure (though published in the early 30s, it seems), even more so than the Heyer story above. It really is quite entertaining, but don't go in expecting any of Berkeley's tricksier plotting.

A police sergeant is supposed to take his family on a seaside holiday during the weekend, but as the week begins he is thrown into work on a case where a man was poisoned in front of a whole party of people as he was going to propose a toast to his step daughter's engagement.

Speaking of tricksy writers... Unlike the Berkeley story, this is much more typical of its author's works. It doesn't feature any of Brand's more well-known detectives, but Sergeant Troot is a pleasant character and he is just as clever at solving these mysteries as those other guys. The highlight of the collection, and an impossible mystery story at that!

Max Carrados is accompanying an acquaintance to a hotel room where a bunch of con artists are plotting to steal some important government papers from him.

This is another playscript, and not all that good. Bramah could do some fair play plotting when he wanted to, but this is not at all that type of story. It's more of an adventure thriller, and not the most engaging one I've read.

A young lady, whose family fortunes have dwindled to nothing, is engaged by an old servant to investigate whether a young man he is fond of is being swindled out of his future inheritance by an impostor, or if that person is actually the true heir of that fortune.

No Reggie Fortune here, but Miss Pumphrey holds her own in this story which actually came with a pretty good twist towards the end. Before that everything seemed to go in exactly the direction anyone would suppose, but Bailey really fooled me. So I was pleasantly surprised by this one. I can't say that it's particularly fair play in its plotting, but it's still very entertainingly told.

A young gentleman is driven to kill his friend because he is behaving more and more erratically, putting the friend's wife - whom he later marries - in more and more embarrassing situations. And to begin with everything seems to go swimmingly, the police cannot find anyone who could be responsible for the murder.

A typical Vickers Department of Dead Ends ending, and thus I thoroughly disliked it. Man, he really could be nasty to his characters.

Agatha Christie - The Wife of the Kenite

A wounded German soldier in South Africa is taken in by a couple, but it doesn't take long before he is feeling increasingly disconcerted by his hosts.

Not one of Christie's mysteries, this is instead similar to her 20s romantic adventures, though this is rather less romantic and more unpleasant. This will obviously never be seen as a classic, but a new Christie story is always worth reading.

Okay, this anthology has no business being as entertaining and good as it is, seeing as it consists of flotsam and jetsam and things that fell by the wayside. I'm not going to say that every story here is a classic, or even near classic, but these stories were almost all entertaining. As usual, I may sound quite negative in my assessment of some of these stories, but there is not a single one that I would rather have wanted to remain buried. And also as usual, if you're more tolerant of inverted mysteries than I am, you might actually find everything here valuable.

There are two stories that stand out for me - the Bruce and Brand ones - but again, not a single one is a story where you read it and then go "okay, yes, I see why this one was left undiscovered for so long". If I were to compare this anthology to the Martin Edwards curated anthologies in the British Library Crime Classics series, I would actually recommend this above all of them except for the one collecting impossible mysteries.

And as there is a second volume coming in July, here's hoping that it retains the quality of this one!