Here we have another collection of short stories from specialist publisher Crippen & Landru. In this volume, we get the complete output of Leroy King stories by author James Holding. The entire series, consisting of ten tales, is included.

All the stories of this series use the same naming convention - The Nationality Thing Mystery. As the savvy mystery reader will know, this is the very same convention used by Ellery Queen in their early novels. And this series is very much a homage to Queen. The lead characters are a pair of cousins, writing mysteries as a team under the pseudonym Leroy King.

These ten tales all take place on a round-the-world cruise, where the cousins - King Danforth and Martin Leroy - and their wives are seeing the sights around our pale blue dot (though it has to be said that the ship seems to be taking a somewhat circuitous route). The stories were mainly written during the 60s (with one straggling tale from '72), and even though there is an obvious homage to Ellery Queen - though these stories are nowhere near as formal as Queen's early novels, I'd actually say that this is closer to what EQ was writing in the 50s - they stand on their own feet as mysteries.

Most of the stories are a bit dissimilar from regular mysteries insofar as they are not really murder (or crime) investigations per se. Instead, our protagonists run into or are told about some peculiar situation, apply their reasoning skills and often find a criminal perpetrator behind the situation in question. 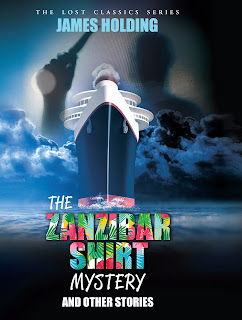 The first story here is "The Norwegian Apple Mystery", where a female passenger is found dead in her bed one morning with a piece of apple stuck in her throat. There are some anomalies, though, and Leroy King - let's call our cousins that - suspect that foul play may have been involved.

A fine introduction to the series which is representative of the series as a whole. The reasoning is sound and though I'm hesitant to call this fair play (the culprit is pulled out of a hat towards the end), I was greatly entertained.

"The African Fish Mystery" takes place off the cruise ship, in South Africa where the cousins and their wives have decided to take a trip through the wildlife. Their chauffeur tells them the tale of a man who had previously hired him simply to drive along the river so he could go fishing from time to time. The cousins get a hunch that perhaps fishing was not the ultimate goal of that trip...

Again, a story where our detectives simply build up a case from something that seems fairly innocuous at first glance. A fun story, though there's hardly any crime in it.

Next time we meet our travellers, in "The Italian Tile Mystery", we find ourselves in Positano on the Italian Amalfi coast. They are staying at a guest house, and the hostess tells them of an extraordinary tiled table that she was given by a guest before he passed away.

And so our friends Leroy King can start building up an interesting plot with a code cracking exercise that is perhaps just a tad too far-fetched. But codes and ciphers are fun, so I forgive Holding.

In "The Hong Kong Jewel Mystery", we're - more or less - back on the ship. It's moored in Hong Kong harbour, and a gang of painters are touching up the outside of the hull. But during the stop someone breaks in and steals valuables from several cabins - including those belonging to Leroy King!

And so our friends the authors have to help the Hong Kong police with first finding the culprit and later where he hid the valuables. The police are awfully magnanimous in taking help from a pair of mystery authors, I have to say. A nice enough story, though perhaps the least successful so far.

Our heroes spot someone is emptying out some kind of toiletries through a cabin window in "The Tahitian Powder Mystery", and when they later spot one of their fellow passengers acting somewhat suspiciously, could there be something criminal brewing?

With a bit of a twist at the end, this is perhaps the most frivolous of the stories. Fun, but mainly if you read it in the context of the whole series. I don't think it'd work as well as a standalone.

Back in Africa, the intrepid world travellers have once again gotten off their ship and are travelling around in "The Zanzibar Shirt Mystery", where they run across a drunkard in a bar who is wearing a very distinctive shirt - in fact, it's so distinctive that they are certain that the shirt actually belongs to one of their fellow cruise companions.

And from such mundane beginnings, Leroy King build up a case where a potential heir is being discredited by another one. Fun, but a tad inconsequential again.

"The Japanese Card Mystery" features another co-traveller, this time a Japanese business man who happens to have a niece who is a mindreader - at least she is able to tell anyone who phones her which card they have picked from a deck of cards.

This really is rather slight - the whole premise rests on one single thing, and it's not very hard to figure the whole thing out. But Holding still manages to give his stories a certain something that elevate them above the ordinary.

And in "The New Zealand Bird Mystery" we are introduced to yet another cruise passenger, but this time it's a dead one! Someone has killed him in the harbour of Hobart, Tasmania. And when some time later Leroy King find a mysterious message to the victim, they begin unravelling the plot behind the murder.

This is rather more substantial than the last few stories. One of the better stories here.

"The Philippine Key Mystery" takes place off the cruise ship, in the harbour of Zamboanga, where our four protagonists have met some of the locals, and during dinner in a seaside restaurant they notice that one of the local kids is wearing a loincloth that seems to be made out of prison clothes.

And from such humble beginnings we get the story of a prison escapee and how Leroy King reasons out how he escaped and alerts the authorities to his whereabouts. This whole story is more or less a flashback which sets up what we got to read about on the first few pages and is then solved in another few paragraphs towards the end. This might be the least successful tale here - it really feels padded.

Our final adventure with Leroy King is "The Borneo Snapshot Mystery, where one of the cousins cannot sleep and so is wandering about the ship at night. He comes across a dead body, lying battered at the bottom of a flight of stairs. And even though the ships crew thinks it might be a simple accident, the cousins have a different take on things.

This story is more or less two halves - the first one gives us an explanation of the mysterious death, and then there is a follow-up which solves why everything happened as it did. A good ending to a lovely set of stories.

This really is right up my alley. I feel that there is some similarity between the way these stories are set-up and the stories of the Black Widowers by Isaac Asimov. Unlike most mysteries, in several of these stories we are not sure that there is actually a crime committed. Sometimes it turns out that way, but not always. And it's certainly mostly a cerebral experience, there's hardly any real time action. I think the fairest way to describe them is that they are true armchair detective stories (even though there are hardly any armchairs featured). And all that fits the Asimov series as well.So if you like the Black Widowers, you will most probably like this series as well.

However, these are not really stories for anyone who enjoys modern mysteries or craves characterisations and/or psychology. These are straight up puzzles for the reader to exercise their brain with. But that's the stuff I like, as you probably all know by now, and therefore this is wholeheartedly recommended. One of the most entertaining mystery collections I've read. It's amazing that I hadn't heard much about them before being alerted to Crippen & Landru's publication.

TomCat was equally impressed with the collection over on Beneath the Stains of Time, and I see that he made the same Black Widowers comparison as I did. :)
Posted by Christian_Henriksson at 12:45