A couple of words of warning though: There's one drawback to Porges's impossible crime stories, and that's the fact that they are fairly formulaic. I wouldn't recommend anyone to sit down and read all the three impossible collections we have with Porges stories (this one, The Curious Cases of Cyriack Skinner Grey, and No Killer Has Wings) in one sitting.

The formula is the following: We have a problem solver who is a bit quirky who is approached by a policeman who is conscientious and by-the-book but not as imaginative as the protagonist (in both the Grey and Middlebie stories, the policeman is a former student of the problem solver). The case presented to our hero generally does not necessitate finding a culprit (he or she is almost always known beforehand), instead focusing on needing an impossible situation solved. The problem solver is told about the case by his policeman acquaintance, and receives meticulous notes on the case, sometimes accompanied by photographs, and then the cop shuffles off-stage, leaving our hero to ponder the whole situation. Sometimes he (or in Grey's case, his proxy of a son) needs to see the crime scene to confirm certain conclusions, and then the problem solver gives us a possible explanation that is generally based on one specific scientific fact, some of these more esoteric than others.

With that said, I'd argue that the Grey and Middlebie stories are the most similar, while Hoffman's cases can divert a bit from the formula, mainly by being longer and offering us a deeper view of the whole affair. But it would take very little to change a Cyriack Skinner Grey story into a Middlebie one, or vice versa.

However, that caveat doesn't really affect the quality of the individual stories. And let's find out what they are like... 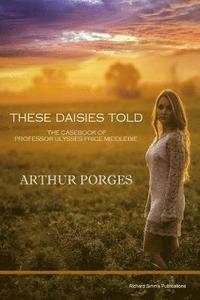 The first story here is the one giving the collection its name, "These Daisies Told". All the pieces of the board are already in place here: Professor Middlebie is approached by Detective Sergeant Black who relates the story of a woman who's vanished. The police are sure that she's been murdered by her husband - they were known to have had a rocky relationship, and she was the one with all the money. The only problem is that they can find no body, and since they've had the entire area under observation and searched the premises with no luck, this presents a problem for them.

The formula is already in place, as I said, so we're told the story along with the professor. This is one of the stories where Middlebie needs to visit the scene in order to confirm a suspicion. The explanation rests on a single fact which I thought was a bit hard to glean from the story itself, but in all I liked this one. It really is a clever hiding place.

"The Unguarded Path" follows next. This offers some variation, since the crime has not been committed yet. A man who is going to be a witness against a criminal syndicate is placed in an isolated house with police guarding every square inch of the premise and the roads surrounding it. But they know that a very clever assassin is coming for the witness, and he's already announced the exact time when the murder is going to take place.

I liked the variation here, but the impossibility (how is the murderer planning to do his deed?) felt almost impossible to solve. It's clever, but I didn't see how it was possible to solve it with the facts we're given. But maybe that's just me.

In "The Missing Bow", a man has been killed by an arrow through an open window while he was shaving in the bathroom. The police are certain they know who did it - a man with an old grievance towards the victim, who was placed in the alley outside the window. But the man didn't have a bow, and the distance between the ground level and the window where the victim was shaving was ten feet, so how could he have committed the crime?

Again, the formula is in full play here: everything is already known by the police, they only need Middlebie to explain the "how". I liked this explanation better - it's very simple, and unlike for example the previous one, the solution is mainly based on false assumptions that the reader should have avoided. The ending also has some variation from the usual Porges fare.

There's a French visitor in "Small, Round Man from Texas", and it's a policeman following a famous robber only known as "The Chameleon", because no one knows what he looks like - though he's known to be quite tall. And since DS Black is also on the case, both policemen come to visit Professor Middlebie and get his opinion on how the robber could have escaped from their very tight security net.

And of course Middlebie focuses on the salient points, finding the person who is most probably the robber. I do think this story underestimates the police quite a bit. In reality, there's no way they'd have missed the bad guy, because they had to be fairly stupid to let him through their fingers. A bit disappointing.

A serial wife killer has been a bit sloppy and left some of his blood behind on the latest crime scene in "Blood Will Tell". However, there's this pesky thing called the Fifth Amendment in the US, and that means that the police cannot take a blood sample from their suspect to compare it with the blood on the scene. So Sergeant Black comes to Middlebie, hoping for a suggestion on how to proceed.

It's a fun and imaginative solution that Middlebie comes up with, but I have to wonder if it would really work in reality. First, would that really be admissible, and second, if it were, wouldn't there still be "reasonable doubt"? But like I said, it's a fun idea, though just a bit slight.

I've already discussed "Coffee Break" in this post. It really is a top story, and it's the only true locked-room mystery here. All other stories are a bit narrower in scope, focusing on a single impossibility that needs to be solved.

"A Model Crime" is rather inverted from the previous stories. Here we have an impossible situation where one person of a small group has somehow managed to smuggle out very small transistors from an electronics company, even though the security measures are very rigorous.

So, this time the professor has to find a possible way for someone to transport these transistors from within the company to the outside. The explanation he comes up with is again quite imaginative and fun, and again I find myself wondering whether this would really work in the real world. One would think that someone would be suspicious about what the culprit was doing...

Professor Middlebie has acted as an armchair detective in the last two stories due to an injury, and continues to do so in "To Barbecue a White Elephant". This time, DS Black comes with a case where a man is suspected of having committed arson, even though he was thousands of miles away at the time.

The explanation that Middlebie comes up with here is based on a very simple thing, something that most of us will have in the back of our minds and should be able to work out. However, I also think that this method would leave behind certain evidence that should be interpreted by the firemen and/or the police after the fire. So I'm in two minds about this - it's creative and very easy, but I'd have liked it more if Porges had managed to explain how they didn't find this corroborating evidence.

In "The Puny Giant", a woman has been killed by being hit with a very big rock, and next to her body is found a very large footprint. The police are suspicious towards her adopted son, but he's a small sixteen year old kid, so how could he have committed such a crime?

This might have the most imaginative solution of all the stories in this collection. It really is fantastic, and all the clues are there. I think perhaps the giant footprint is a bit of a weakness here, because I think that the police should have been able to recognise how it was made (or at least how it wasn't made), but the explanation for how the murder was committed - wow! A great one.

"The Symmetrical Murder" gives us a case where a man has been killed by a blunt instrument while out on a balcony in the fog. The hotel where he resided is built as a symmetrical structure with two wings of three floors each. The apartments below and above the one where the man was do not offer any means of allowing the crime to happen, and so Professor Middlebie needs to come up with an explanation for how someone could have killed him from the opposite wing.

Which he does, in a fairly clever way. I'm not quite sure of the science here, would the weapon really return to the killer as Middlebie explains it? It probably would, my mind just can't really see how it works.

This collection ends with "Fire for Peace", where someone is setting small fires in a chemical warfare company by somehow smuggling in incendiaries.

Hey, I gotta agree with Middlebie, I don't really see a reason for trying to catch the culprit here. The explanation offered by the good professor is a bit out there - I don't really feel that there was enough cluing here to give the reader a chance to match his wits with Middlebie. Clever, but not Porges's best tale.

I haven't been gushing about these stories in the individual reviews, but I want to make it absolutely clear: The general quality here is much higher than for example in the BLCC anthologies I've reviewed lately. I'm reviewing these stories against each other, not against the stories in those collections.

The type of stories Porges writes is the kind that generally suits me to a T. His tales are very focused on providing a clear problem, with a solution that's just as clear. The characterisation is almost non-existent and what there is is just there to provide some context. It's probably as far from a modern "mystery" as you can come while still remaining in the genre.

If the rumours are true that there will be a fourth and final volume of Porges's uncollected impossible stories, this reader will be very happy indeed.

The best stories here, and the ones I'd like to include in my impossible project, are: "The Missing Bow", "Coffee Break", "To Barbecue a White Elephant" and "The Puny Giant".

TomCat was also very happy with this release when he reviewed it at "Beneath the Stains of Time".
Posted by Christian_Henriksson at 12:51