No Killer Has Wings - Arthur Porges

Arthur Porges might just be the most unsung hero in the impossible mystery genre. Carr and Rawson are always mentioned as the towering giants, Edward D. Hoch and Bill Pronzini get mentions as the men who carried their legacy into the modern era, and Paul Halter is hailed as the modern, foreign alternative.

But Porges, who together with these five is the writer who wrote most impossible mysteries ever, gets nary a mention. This has to stop. There are definite problems with some of Porges's works - we'll get to those - but someone who has written more than 50 impossible mysteries cannot be as neglected as he is.

A sign of this neglect is the paucity of available works by this prolific writer - because he wrote not only impossible mysteries, no, he dabbled in almost every genre. Or perhaps that should be "was". Because over the last decade or so, Richard Simms, one of his greatest fans, has ensured that stories by Porges get published for all our enjoyment.

"No Killer Has Wings" is one of those collections. It features all the stories Porges wrote about Dr. Joel Hoffman, pathologist and solver of impossible mysteries, six in total. One thing about Porges is that the solution of many of his impossible crimes rely on one scientific detail. This is more evident in his Cyriac Skinner Grey stories, but it shines through somewhat here as well. 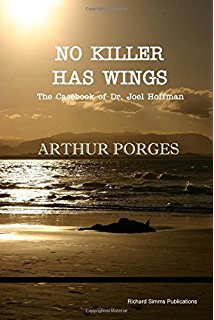 The first story of this volume is "Dead-Drunk" wherein a man is found in a coma inside his own home. Most everyone believe that this is due to a diabetic coma, but Lieutenant Ader has some niggling doubt and brings the case to Hoffman.

This is one of those stories that will be hard to solve for the layman reader. The reason for the coma is one that generally only those who come into contact with the agent will even know about. Still, it is a nice enough introduction to Dr. Hoffman, who is an interesting person in his own right.

Next is "Horse-Collar Homicide". This has a crazy setup with a family where the pater familias drives everyone crazy with his ideas and opinions. Of course, one fine day he drops dead during one of their family games - there are however no traces of what killed him, so it gets written down as natural death.

Again, the solution to the impossibility is somewhat obscure, though not as hard to get as in the previous story. Porges has an interesting tendency to create stories only to ensure that we get a situation where a particular murder method is possible, and this is definitely one such example.

"Circle in the Dust" is the only non-impossibility featured here. This time it's an old lady who gets hit over the head with a blunt instrument, and Dr. Hoffman has to figure out who would have motive to kill an old lady with no valuable possessions.

Hoffman blunders around a bit here, searching for physical clues, until he finds another fairly obscure fact which pins it on the murderer. The motive seems pretty flimsy to me, to be honest. But some of the clues are very well-handled by Porges.

If you know one story by Porges, chances are that it's "No Killer Has Wings", since it's appeared in the odd anthology. Another pater familias is killed here. This time he is battered to death with his own walking-stick on a secluded beach with only his nephew's footprints leading to and from the victim. Dr. Hoffman gets called in just to make sure whether it is in fact the nephew who committed the murder, and if not, how it could have been done.

The solution is simply great. It ties together everything in a neat little bow. It also has the advantage of not relying of some obscure fact or anything like that. Anyone who reads this can figure it out - if they're clever enough!

"A Puzzle in the Sand" is more or less a direct follow-up to the previous story. In fact, it uses the exact same beach setting. The house from the former story has been rented by a new family, and again the head of the family is found dead on the beach, and only one person's footprints lead to the victim and back again. The main difference is that he has been shot.

Lieutenant Ader is understandably jittery about a case which is almost a carbon copy of a previous one, and Dr. Hoffman gets to strut his stuff again. The solution is quite different here, which is hardly that strange seeing that this is a shooting instead of blunt trauma. Porges lets the killer get off without a trial here, and it has to be said that in several of the stories here he has some very different endings to the ones we're all used to.

We finish off with "Birds of One Feather", the shortest story here. In this case, a man is found dead in his car through cyanide poisoning. But why is his beloved parakeet also along in the car, and why is the bird dead?

This is an awesome murder method. I got the inclination to jump up and shout "yeah!" when I read the explanation. I'm also quite convinced that no murderer ever would try his hand at something like this. So yeah, it's awesome and improbable to the extreme. Still, awesome outweighs improbable.

Some of Porges's writing tics are in evidence here - obscure facts, a tendency not to end his cases "properly", and several others. But compared with some of his other stories, the Hoffman stories seem more well-rounded. They are also a bit longer than, say, the Cyriac Skinner Grey stories, which allows him to get in more background.

I'll be using "Horse-Collar" and the final three stories for my project. They are the most well-rounded and solvable of the stories. I think the first story works as an impossible story as well, but it's just a bit too hard to actually solve it, and thus can be a bit of a disappointment.

Here's what TomCat had to say about the Dr. Hoffman mysteries over on Beneath the Stains of Time: http://moonlight-detective.blogspot.se/2017/09/the-problems-of-dr-joel-hoffman.html