This collection, expensive and not easy to come by, is nonetheless the best way to acquire these rare stories by Rawson. Actually, they were all originally published under the pseudonym Stuart Towne, but this volume is credited under Rawson's own name.

It's a lovely book published by The Battered Silicon Dispatch Box, whose publications are admittedly quite expensive, but with publication of such rarities as these, they are true benefactors to all us mystery lovers.

This collection features the four novellas about Don Diavolo. All of them are very long - in fact, they're so long they could almost be called short novels. They are all divided into about fifteen chapters each.

After those four, we get five other pulp stories written by Stuart Towne. Three of them constitute a series of their own, about another magician protagonist, the enigmatic Mr. Mystery. The other two are regular hardboiled mysteries. Note that only the Don Diavolo mysteries feature true impossible crimes.

Rounding out this volume are several interesting introductions and prefaces about the author, the publication history of the stories and much more. 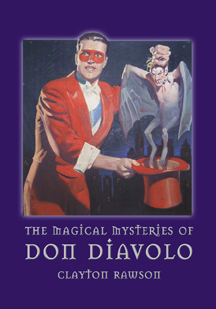 The first story is "Ghost of the Undead", probably the most "un-pulpy" of the stories here. After finishing his magic show, Don Diavolo is called on by a woman who wishes to speak with him. However, when he exits his dressing-room, the woman is lying dead in a room whose only exit was guarded, but somehow a bat is flying around in there.

Here we are introduced to Don Diavolo and his entire crew - his female assistants Pat and Mickey, technician Karl Hartz, jack-of-all-trades Chan Chandra Manchu, and of course newspaper columnist Woody Haynes and the ever more annoyed Inspector Church.

This story makes use of the vampire legends, but never succumbs to the supernatural, instead using these old legends to craft a wonderful backstory for the crime. Seeing that the story was published in a pulp, there are of course some gangster trappings, lots of guns, dim policemen and so on. But Towne never skimps on the logic. The explanation for the impossibility is grounded in reality, and the more outré pulp trappings only get to set the pace of the story. And it does have pace! A wonderful story.

Don Diavolo's next case is "Death out of Thin Air" which is a bit more pulpy. In it, a policeman is murdered inside Police HQ while on the trail of an Invisible Man. Inspector Church more or less witnesses the murder happen, but when he searches the murder room, he cannot see anyone there. And then we get treated to a couple of imaginative thefts, Don Diavolo gets shut into an airtight safe, and so on, and so forth. The pace never lets off.

The next installment, "Claws of Satan", has a great locked room beginning. A circus owner has swindled Don Diavolo out of a magic trick invention, and of course Don decides to give him a piece of his mind. However, as soon as he enters the circus owner's office, Don sees that he is dead, but immediately gets hit over the head. And when he comes to the police are already knocking on the door - and Don is alone with the corpse!

In this story we're treated to more of the circus life - similarly to the concurrent Rawson novel "The Headless Lady". This more than makes up for the fact that the impossibility is more easily seen through than in the earlier stories. The fact that it is another pulp story with lots of pace and stuff happening all the time is probably necessary - if the reader just stops to think about the whole thing for a while, the explanation should be clear. But as I said, Towne never lets off and the energy sparkles and crackles the whole way through. So it's still very worth-while.

The final Diavolo story is "The Enchanted Dagger", where we get a traveller from the Far East bringing the titular dagger with him. But he is also shadowed by a shady Indian fellow, who enters his hotel room. The first chapter ends with a shootout. But, of course, not all is as it seems.

This is probably the most pulpy of the Diavolo stories. We have an Indian mystic who challenges Don Diavolo with his trick of vanishing right in front of people's eyes. I'm less pleased with the solution of this impossibility. It's a hokey trick that I personally don't want to see used to explain impossible disappearances, but tends to appear from time to time. Still, I had a lot of fun reading the story, so I won't complain too much.

After these great Don Diavolo stories, we get a one-off called "Stand in for a Kill". This is more of an adventure/thriller type story with a plot we've seen a million times by now - two murderers agree to switch victims.

So, not the most original thing. And the ending is a bit telegraphed, as well. The setting is well written, and we get to see another seedy part of New York in the 40s, but it's hardly enough to save the story.

The next story, "Mr Mystery", introduces Rawson's third magician detective. He is a mentalist who's doing a show at a hotel at the same time when a murder is committed. A small-time pickpocket is immediately suspected, but Mr. Mystery doesn't think he's the culprit.

And thus follow shenanigans all over the hotel with people sneaking in and out of rooms. You get the picture. However, it's still all very entertaining. Mr. Mystery, as opposed to Merlini or Diavolo, is a hard-hitter, so he gets into more scrapes than the other two. It is, however, just as fast paced as the Diavolo stories. On the whole a fun read.

The Mr. Mystery stories continue with "The Man with the Radio Mind". This time we get another one of those "two magicians challenge each other to do even more daring feats". In this case, Mr. Mystery's challenger, The Great Rajah, manages to solve a mystery for the police with his mental powers. But Mr. Mystery has his suspicions...

This is the lightest and also the shortest of the MM stories. There's never really a doubt about anything here. The only thing it's got going for itself is, again, the pace. A slight disappointment after the previous story.

The third and final MM story is "The Ace of Death", wherein someone falls down the elevator shaft of the hotel where Mr. Mystery is giving a show. Again Mr. Mystery's pickpocket friend is hotly suspected, so the magician has to do what he does best to get him out of the pickle.

This story is quite similar to the first MM story with lots of shenanigans in the hotel and having to save the pickpocket friend. But it's still different enough to stand on its own feet. Another story that is good fun.

The collection ends with the standalone "The Man with X-Ray Eyes", another story that is long enough to feature chapter divisions. The titular character is a man with amnesia who can predict when people will die. And our protagonist is a moody detective with a golden heart who has to find out how those predictions work - is the man with the memory loss just a confidence trickster, and what does he know about the crimes?

This is a hardboiled tale, and those are generally not to my tastes. But there is an energy and carefree quality to this story that I actually don't mind it too much. But it's not a fantastic story in any way. The explanation - or perhaps I should say non-explanation? - to the murder predictions is a thorough disappointment.

This collection is a bit of a mixed bag quality-wise. The Don Diavolo stories are all excellent or at least close to that. The five pulpier stories that round out the volume are less great, but at least the Mr. Mystery stories are well worth reading. Even if none of those five are true impossible crimes, because of the way they are written, they still come close enough that an aficionado will probably get some enjoyment from them.

If you didn't already guess, I will include all four Don Diavolo stories in my collection of impossible mystery short stories. They are all of top quality.

The final two Diavolo stories are discussed by TomCat here: http://moonlight-detective.blogspot.se/2017/03/theres-no-such-thing-as-magic.html
Posted by Christian_Henriksson at 19:54