As I've mentioned earlier, one of my previous projects was to ensure that all short stories by several authors were translated into Swedish. One of those authors were Clayton Rawson, and this is mainly a rewrite of the foreword I created for the e book I made.

Yes, I am crazy. Deal with it.

Clayton Rawson is one of the more prominent figures in the mystery subgenre called impossible crimes. His colleague John Dickson Carr ranked him as one of the six best mystery writers ever, and Fred Danny (one half of the author firm Ellery Queen) called him "one of the topflight mystifiers in the whole bloodhound business, a favorite with plain fans and fancy connoisseurs alike".

Under his own name, Rawson only produced four novels, of which several are hailed as cornerstones in the genre, and the twelve short stories that are collected in this volume. Apart from that he used the pseudonym Stuart Towne (which he took from one of the characters in his own novel "The Headless Lady") four novellas about the illusionist Don Diavolo and a handful of shorter stories closer to the hardboiled genre.

All stories published under Rawson's own name feature the magician Merlini as the main character. In this volume we get a large variation of stories: some very short stories with a challenge to the reader (an idea mainly developed by Ellery Queen which was somewhat popular during the Golden Age) and they can rather be described as pure puzzle stories where the reader has to find the answer to a specific situation; and a number of longer stories where Rawson has the opportunity to develop the impossible situations.

The former category were all published in Ellery Queen's Mystery Magazine (EQMM) during the 40s and 50s, and the solutions were published one or two issues later. Fred Dannay said that Rawson "conceived and executed his little posers with a subtle blend of malice aforethought and loving kindness". 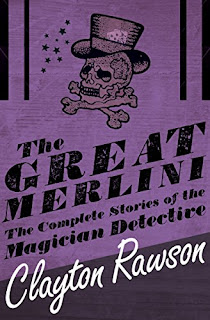 First we have "The Clue of the Tattooed Man", wherein a snake charmer has been strangled while her door was watched by several persons, all of whom swear that only one person entered the room. But Merlini knows that he didn't do it.

Next is "The Clue of the Broken Legs". Producer Jorge Lasko, with both legs in a cast, is found murdered. Four people are in the house, which one is the killer?

"The Clue of the Missing Motive" follows next. A man is murdered in the park, and the weapon is found in one of the houses bordering on that park. But which one of the inhabitants could have a motive to kill the unkown man?

These stories are generally just brain teasers, where we need to find the important clue. I find them fun to read, but perhaps not the most interesting when judged as stories. The first two are at least fairly clever, but the third one should be quite obvious to the seasoned mystery reader.

"From Another World" was ranked as the second best short story in EQMM 1948. It is also quite interesting, since the whole premise of the story was a challenge between Rawson and the aforementioned Carr to write a story where the impossible crime takes place inside a room which has been sealed off with paper around every entrance. (Carr's solution can be found in the novel "He Wouldn't Kill Patience".)

This is one of the cleverest solutions I've seen, and the story is a firm favourite of mine. The misdirection used by the killer is simple but efficient, and it's really one of those "Of course!" moments for the reader. Good stuff.

In this collection you'll also find the short story "Merlini and the Photographic Clues". Originally, this was published as a jigsaw puzzle in 1949 where the story was printed on the back side, and where you had to finish the jigsaw to create the picture which is shown in the story and is used as the definitive clue to solve the mystery. The jigsaw puzzle text was rewritten into a regular story in 1969.

The story is an impossible crime in the sense that it's an unbreakable alibi. It is quite short, and the photographic clue is actually quite well made. I do think that everyone should have been able to interpret it correctly, not just Merlini.

"Off the Face of the Earth" follows thereafter. This is another story that received an award from EQMM's readers, in this case it was ranked as the best story of 1949. Like the previous longer story, it features newspaperman Ross Harte as the narrator. And yet another similarity is that this story is also a challenge between Carr and Rawson. In this case the impossibility is a man who disappears without a trace from a phone box guarded by police.

I think Rawson's solution here is cleverer and more plausible than the one Carr came up with in his short story "Scotland Yard's Christmas". It makes rather good use of the fact that Merlini is a magician, and the misdirection used by Merlini when he wants to reenact the problem is elegant yet simple.

Then we have another three stories with a challenge to the reader. First comes "Merlini and the Lie Detector". A film producer is killed and there are two suspects present. Which one is telling the truth and which one is lying?

"Merlini and the Vanished Diamonds" comes next. A magician is accused of being a jewel smuggler, and yet the police have searched him and the cabin he was travelling in. Now Merlini has to find out where those diamonds are hidden.

The final story of this second trio of shorter stories is "Merlini and the Sound Effects Murder". A man is murdered, but the murder is caught on tape. However, the only suspect has a waterproof alibi. So Merlini needs to break it down somehow.

Again, these three stories are simply brainteasers, mainly fun and games. The second and third are both fairly good, while the first of the three is a bit too coincidental. It would probably be fairly hard to prosecute someone based on just that single clue...

"Nothing Is Impossible" is a longer story, wherein it seems that aliens somehow have managed to enter a locked room and killed a man in there. To be honest, this is one of those stories where the culprit is fairly obvious - the whole thing is to find out how he managed to swing it. There's some similarities to Bill Pronzini's classic impossibility "Proof of Guilt".

The explanation is quite fun, but also pretty stupid, at least the bit about aliens. The rest seems quite plausible, but one has to wonder why the murderer would commit murder in that way. I'd like to add here that I enjoy having Ross Harte as the narrator. He's sort of an Archie Goodwin type of character and adds a bit of fun to the proceedings.

Harte is featured in "Miracles - All in the Day’s Work" as well. In this story, Merlini explains how a man could have been killed in his office while a policeman was sitting outside the door the entire time and no one entered or exited the office during that whole time.

Another likeable story. The explanation to the impossibility is very nice, very simple.

The final story of the collection is "The World’s Smallest Locked Room", a shorter and slighter story where I question the term "locked room". Another producer (did Rawson have something against that profession?) is killed sitting at a cafe table with two companions.

This is on the whole a very good collection of stories. Rawson had very good ideas and in the short story format he never loses his way, the way he did at times in his novels. It's a must have for any impossible crime aficionado.

For my own part, I will add the four longer stories ("Off the Face", "Nothin Is Impossible", "Miracles" and "From Another World") to my own project. They are among the best stuff you can find in the genre.

On Beneath the Stains of Time, TomCat has a review of this title: http://moonlight-detective.blogspot.se/2016/04/magicians-bouquet.html
Posted by Christian_Henriksson at 15:17