Impossibilities of the 1800s


In my last post I promised to go through the selected short stories for this impossible project of mine (pun intended). I intend to do so in a roughly chronological order according to when the stories were written. However, bear in mind that this project is still ongoing which means that there may be later additions from a time period that I've already gone through. Obviously I'll have to do those separately at a later date.

We'll start here with the stories from the 1800s. It's fair to say that these stories are generally only tangentially mysteries in the sense that I outlined in the previous post. There is certainly some fair play here and there, but the main reason for including these stories is their historical importance - not so much their actual content.

We'll start here, with the acknowledged creator of the mystery genre. This is of course clearly debatable, since different elements of mystery had already been present in several other, earlier works. But arguably Poe was the first author to add in a ratiocinator who bears the entire responsibility of solving the mystery.

Poe is represented by two stories, both obvious choices. The first is "The Murders on the Rue Morgue". Generally seen as the first locked room mystery story, this too is somewhat debatable. If you've lived under a rock your entire lifetime and thus never read this oft-anthologised story, here's a short description of the setting: A mother and daughter are find in their locked apartment, brutally and violently murdered. Our detective, C. Auguste Dupin, and his unnamed friend AKA our narrator begin investigating the murder. A chief clue of the case is that several people of different backgrounds heard the murderer speak, yet none of them understood what he was saying, even though between them they spoke almost every language in the world.


Okay, the solution here is ludicrous and stupid. ("Ook", agrees the Discworld librarian.) The explanation of the language clue only works if you don't actually think it through - how on earth can any rational person mistake **** for language X/Y/Z? Apart from that there's a fair paucity of clues - there is a discussion about the murderer's strength and so on. It is also quite obvious that this was written by an author of Gothic horror stories - I'd hazard a guess that Poe actually never had in mind to write a plausible story, rather it was supposed to be another of his shock stories - contrasting the normalcy of Paris and Dupin with the final solution.

Anyway, it needs to be included, of course. But only recommended for its historical value.

The next Poe contribution is "The Purloined Letter". This is rather more like it, and by "it" I mean a modern 20th century mystery. Here, we find none of the Gothic trappings of the previous story. This is a mundane story set in the real world - a well known man has stolen a letter which contains compromising information and is proposing to use it for blackmail. He has hidden it somewhere and the police cannot find it, even though they conduct a thorough search of his residence.


The basic premise that the culprit uses when hiding the letter has some basis in fact. Still, come on. Of course the police would have found it, if this were reality. It beggars belief that any search would not find the letter. Sure, a cursory glance would miss it, but in the story it's stressed how thoroughly the police have searched the rooms. No, unfortunately the solution is a bit of a letdown here as well - though it's nowhere near as bad as "Rue Morgue" and a definite step in the right direction.

At this point, I'll almost immediately abandon my chronological setup and add in the Michael Harrison story "The Facts in the Case of the Missing Diplomat". There is some method in my madness, though, since this is simply a pastiche of Poe's Dupin stories. Some 120 years had passed between the writing of these stories, and when Harrison wrote "Diplomat" the impossible mystery genre had been in full swing for many, many years and had been developed by several brilliant authors (to be discussed later here on this blog). So, did Harrison make use of that?

Yes, he rather did, I think. In his story, a diplomat disappears from a yard by stepping out through a gate onto a street. When his aide comes running after just a couple of seconds later, the man is nowhere to be seen on the street, and a search cannot reveal where he is.

When reading Harrison's pastiches, one immediately notices the humour. Dupin is developed into a more realistic character here and we get to follow his investigations more closely than in the Poe stories where it seems Dupin just presents the solution for the narrator and the reader without any of us having any chance to understand the how and what. I guess we have those 120 years to thank for that. 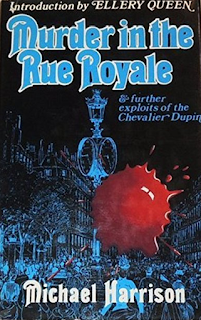 So, what about the solution then? It's rather clever and probably would work fairly well in reality. It's also fairly clued - perhaps it gets a bit obvious towards the middle when Dupin asks his questions. But then again, Dupin had already seen the solution by then, so why shouldn't we? This story is recommended to locked room aficionados.

Let's get this out of the way. Reading Sherlock Holmes stories is great. Reading them as mysteries is... not great. The main takeaway from them is the characters themselves, the way they interact, the setting of the late 19th century with gaslights, London fog, horse-driven carriages and so on. As mysteries, some of the stories are good, some are even great, and some are definitely disposable.

Doyle has three impossible stories to his name. We'll begin with the ubiquitous one - "The Speckled Band". A young lady visits Holmes, telling him how her sister died in a locked room at night with no apparent explanation. And now she has to occupy the same room... 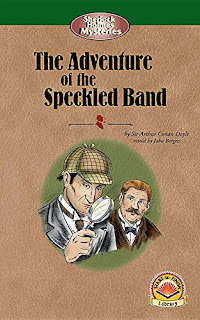 I've seen here and there that Doyle described this as his favourite Holmes story. It's certainly one of the most famous ones, no doubt about that. But on the whole, this is just about as ludicrous as "The Murders in the Rue Morgue". The solution would definitely not pass muster in a more modern impossible crime story. However, I don't really think that Doyle had any specific plans to actually create an impossible mystery - it was just another way to baffle the reader and Watson.

It's been anthologised everywhere, and if you haven't read it, you should. But don't expect any true fireworks.

There is a second Holmes story by Doyle which contains an impossible mystery. That story is "Thor Bridge", and compared with "The Speckled Band", this is a pretty darn good impossibility. A woman has been killed, shot on a garden bridge, and her husband employs Sherlock Holmes to investigate the killing and to try to clear the governess who is the main suspect. 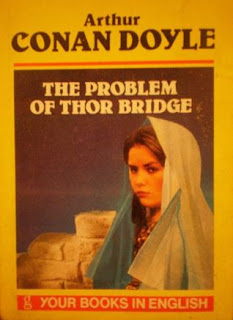 The revelation is fairly clued, and the solution works - though there is a bit too much of the Victorian wrining of hands and "female emotions", even though the story was written in the 1920s. On the whole Doyle wrote a winner here.

It's certainly possible that by the time he wrote this story, he'd been influenced by some of the early practitioners in the impossible genre (I'm thinking mainly of Jacques Futrelle and G. K. Chesterton here), because there is some care to make the story a realistic one.

Apart from his two Sherlock Holmes impossibilities, Doyle also wrote "The Lost Special". This is one of the subgenre "train mysteries" - a subgenre I enjoy a lot. A train leaves the station, but never arrives at its destination. Everyone searches the tracks the whole way between the last place it was seen and where it was due to appear, but no one find any traces of the train. 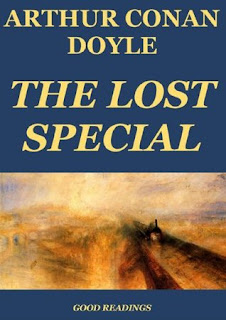 Some tie this story in to the Holmes oeuvre by the fact that Doyle uses a "well-known detective" as a character in the story. Be that as it may, the solution - revealed through a letter from the dying culprit - is somewhat hard to believe. Well, perhaps not the solution in itself, I guess that works pretty well. But again, just like in "The Purloined Letter" it's hard to imagine that the search for the train would actually miss finding it.

Still, it's a pretty clever story and well worth reading.

There are quite a few other stories in the impossible genre featuring Sherlock Holmes, but they are all written by other authors. I'll come to them later on, when we reach them chronologically.

In the next post, we'll move into the early 1900s. And if you think there are stories missing, there's probably a reason for that. Either that I don't like them or that I missed them. You never know...
Posted by Christian_Henriksson at 15:53