This was Adey's first anthology of impossible murders, coming out before his collaboration with Doug Green, "Death Locked In". Meanwhile, Jack Adrian is mainly known as an editor of several SF/Fantasy anthologies, but also as a writer in that genre and in comics.

In this anthology, the two come together to bring us a number of fairly unknown stories. Most of them are not collected in any of the other prominent locked room anthologies. 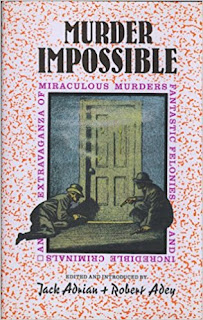 Hake Talbot - The Other Side

Svetozar Vok and Rogan Kincaid work together to find out who killed a colonel whose ward is in danger of ending up in a dangerous cult. The cult leader is heard to chant in his room next door, and soon after the colonel walks into the next room and shoots himself.

Talbot uses hypnosis in the only way it should be used in an impossible mystery, as a simple misdirection. Unfortunately, it's fairly impossible for the reader to spot how the murder could have been worked. But bonus points to Talbot for using a language that I actually speak a little.

Vincent Cornier - The Courtyard of the Fly

Jeweller Henri Labordien is in the process of mounting a set of pearls when a fly comes in through his window and steals the pearls.

This is a typical Cornier tale, though not featuring his main sleuth, Barnabas Hildreth. Its main merit is its shortness, because everything else is pretty bad. The whole piece of writing is rather baffling, and the impossibility is dead easy to solve - and at the same time I'm fairly certain it would never work.

A man is found killed in his secluded cabin which had a locked door and closed windows. His nephew is immediately suspected, but there is hot coffee and a burning cigarette inside the cabin, indicating that the man was killed long after the nephew was seen leaving the cabin.

A very clever story with a top solution. This story features one of Porges's many sleuths, in this case Ulysses B. Middleton, whose stories should really be collected one of these days.

A sea captain hears someone whispering in his cabin at night even though there is no one present. His first mate sits guard the following night and hears the same whispers, and what's worse, somehow someone has stolen a chest containing gold from the hold below. But when they investigate some time later, the chest is back again...

A bit too simplistic for my tastes. The explanation for the missing and returning chest of gold is trite and there's secret panels and stuff like that that doesn't belong in an impossible tale.

A man has been killed in his office, with only one other person present, and there is no weapon to be found anywhere even though the police search both the surviving man, the dead body and the room itself.

A fantastic solution to a great impossibility. Pronzini as usual provides us with a fairly clued story. A really great one.

Jacques Futrelle - An Absence of Air

Someone is killing a number of people, and the only trace he leaves is a small puncture wound in the victims' cheeks.

Okay, the science of it all doesn't work, but this was the very first Futrelle story I read, and I have a soft spot for it. Not great, but still a very fun read.

A private detective and his dog investigate a case where a man has been murdered in his study. Only the French windows were open, and the victim's dog had run off towards the woods, as if following the culprit. Suspicion falls on the murdered man's siblings but they were all elsewhere.

Is this really an impossible crime? I just don't see it. The windows were open, and the murderer had time to fire his weapon, get rid of it and still get away and then return without any trouble. But a pretty fun solution, nonetheless, and a good read.

The titular Pettigrew has been killed in a train compartment, where only his niece was present at the time.

So, since this is an impossible tale, you'll know that at least she wasn't the killer. Unfortunately, the solution here is one of those that I find infinitely stupid and silly. We've seen it in some of the stories I've reviewed elsewhere and it's always a huge letdown for me.

Joseph Commings - Ghost in the Gallery

Scotland Yard detective Peter Dawes has to find out how master thief Four Square Jane managed to steal a painting from a museum room where only two visitors had entered.

The solution is a bit silly, perhaps - mainly because it relies on the old "Purloined Letter" trick - but also quite ingenious in its simplicity. There's some similarity to a certain Jonathan Creek episode, though I think they stand on their own feet.

Gerald Findler - The House of Screams

An aspiring writer has rented a house, but at night he is awoken by a terrible scream. He starts investigating and finds an old skeleton in the locked and sealed attic. It turns out to be a man who's committed suicide after being haunted by the same type of scream as the writer.

This is mainly a vignette, bordering on horror, and not really a mystery. Fun for what it is, but I don't know that I'd call it an impossible crime either.

Captain Leopold is stuck in rush-hour traffic when he spots another car that doesn't move at all. The driver in the car behind is knocking on the windows, and it turns out that the man inside is dead, and has been so for some time, strangled by a cord.

Like Pronzini, Hoch can always be depended on to deliver the goods. This is another awesome impossibility and the solution is perfect. The only minor quibble I have is that there really is only one solution possible, but Hoch manages to focus the reader's attention elsewhere so it's still really well hidden.

Morlock Tomes and doctor Clotson discuss a previous case where a man was killed by being washed overboard from his boat and then his body appeared five minutes later 300 miles away.

Okay, as you may have gathered from those names, this is a parody. The solution is actually kind of fun, but as it is a parody, also quite silly.

A radio script, and therefore not discussed here.

A rich man has died from starvation even though it's proven that he took dinner at the titular restaurant every day.

This is not my type of story at all. The solution hinges on something that I definitely don't believe in and find the worst type of cheat. If it had been written tongue-in-cheek, I'd have liked it better.

A man and a woman are found murdered in an apartment with locked windows and door, and several lawmen were guarding the house.

The misdirection entirely depends on Rogers's writing style, which is pulpy to the max. Things are happening all the time and there's a sense of urgency to everything. However, once you're hip to Rogers's style it's very very easy to spot who the killer is. The impossibility is quite good, but I'm not overly fond of Rogers's writing.

Jeffrey Wallmann - Now You See Her

Two policemen are investigating why and how a woman has disappeared from her apartment even though it was being watched by two private detectives the whole time.

A fine impossibility and a solution that I think works. Maybe there would have been some traces left that the police should have spotted, but I'll give the author the benefit of the doubt. A good story.

A playwright is involved in a car accident, and the man he was speaking with at the moment has disappeared. Unfortunately, he needs to find him because he's forgotten the plot of the play he was writing. The only thing he remembers is that it was a devilishly clever solution to a locked room...

So this is an inverted thing with an ironic twist in the tail. Not really an impossible crime at all. Not a fair play mystery, at any rate.

This is just a short parody of a typical dénouement in a Carter Dickson novel about Sir Henry Merrivale, not a real fiction story. Fun, but quite inconsequential.

On the whole, the selections here are well-chosen. I didn't like all the stories, but I thought they all belonged here for some reason or other. And some of them are really great, no doubt about that.

The following stories are the ones I added to my project: "The Other Side", "Coffee Break", "Proof of Guilt", "Absence of Air", "Missing Romney", "Impossible Murder" and "Now You See Her".
Posted by Christian_Henriksson at 11:20