It's now time to start looking at a number of anthologies focusing on impossible crimes. As I mentioned in my post on Jan Broberg, we've recently seen a discussion in the blog world about a certain list of 15 best impossible mysteries. So let's begin with the anthology where this vote actually took place. 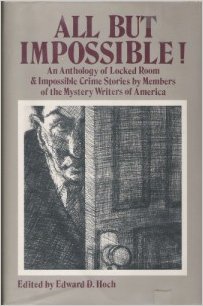 "All But Impossible..." was one of the first English language anthologies that focused entirely on impossible mysteries. Not the very first - I think that honour belongs to Hans Stefan Santesson's "The Locked Room Reader", which was a very fine collection of stories, but has been superseded by later anthologies and therefore won't feature here on the blog. "All But Impossible..." features stories by several of the most known impossible mystery writers, but also a couple of surprises from less expected writers.

John Dickson Carr - "The Shadow of the Goat"

The Belgian father of the Inspector Maigret stories is featured here with a non-Maigret story. A man has received a death threat, and even though the police have surrounded his house completely, somehow he dies with a bullet in his chest.

Okay, I think this is one of those instances where editors pick stories because their author's are well-known and they want to include something by them. This is supposedly Simenon's only impossible mystery. And a good thing that, because this is very poor. Or rather, the explanation is. The setup is not bad, but let down oh so badly by the "revelations".

James Yaffe - "The Problem of the Emperor's Mushrooms"

Yaffe, perhaps best known for his stories about "Mom" the detective, gives us a story where Paul Dawn is invited to his university professor and told a story about emperor Claudius's death by poison. The professor is convinced that it was murder, and Dawn is asked to work out how it could have been done.

I thought this was much better (admittedly, that doesn't say much). Dawn is quite likable, the real world story is interesting, and the twist at the end is quite fine. Quibblers may note that there is never any confirmation of whether Dawn's theory is correct.

Clayton Rawson - "From Another World"

Helen McCloy - "Through a Glass, Darkly"

This is the (original) short story version of the novel featured in the list of 15 best impossible mysteries. A teacher is summarily dismissed from her position without receiving any explanation, and Basil Willing steps in to investigate the circumstances behind it.

Personally, I like this version better than the novel, mainly because I don't think the whole thing supports a full length novel. The explanation for the "impossibility" - if you can call it that - is one of those things I really dislike, but McCloy manages to work it to the best effect possible.

de la Torre mainly writes historical mysteries featuring real world character Dr. Sam: Johnson, and this story is one of that series. A lady who's recently arrived in London from Jamaica is fearful that her jewels will be stolen, and therefore she sleeps in a locked room. But one night she is murdered with a knife through the chest.

I have a confession to make. I don't particularly like historical mysteries, particularly if they take place in the 1500s to the 1700s AND especially when the author makes an effort to write their prose in the language of the time. One problem is of course that English is not my native language, so it gets very tiring to try to first translate it in my head into modern English and then into Swedish. It also seems that to many English speakers those time periods are greatly interesting, but they leave me absolutely cold. I don't like the customs of those times, I don't like the beliefs of those times, I really don't like anything at all about those times. And it helps even less that I think that the solution here is dead boring and incredibly stupid.

Asimov is nowadays of course mainly known for his science fiction output, but he always dabbled in mysteries - sometimes pure mysteries, sometimes as a hybrid with SF. This is a case of the latter. A man is locked into a competely sealed room (no doors, no windows, just six walls) by a demon and challenged to get out of there.

It was a fun read, I guess, but since the solution is not fair play it doesn't really fit in with everything else here.

We get another SF mystery from Anderson. Sherlock Holmes is parodied here with the Martian detective Syaloch who lives on the Street of Those who Prepare Their Nourishment in Ovens. The Martian crown jewels have been exhibited on the earth, and are now due to be shipped back to Mars on a robot ship. However, when the ship arrives, the jewels are nowhere to be found.

Unlike the previous story, this doesn't rely on SF or the supernatural to explain the impossibility, and it's a really fun read. I'm not 100% sure the solution is purely fair play to the reader - I don't feel we knew everything necessary to solve it - but otherwise it works fine and is quite fitting for it's SF setting. 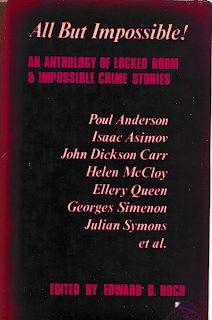 The driver of the school bus drives off with his bus full of schoolchildren, but never reaches his destination. And even though everyone in town searches through the road the bus should have travelled, they cannot find any traces of it.

A wonderful story with an innovative way of revealing the solution. A true classic of the genre.

Julian Symons - "As If By Magic"

A short Francis Quarles story about a man who murders another man on an amusement pier and then manages to vanish completely.

The solution here is fairly obvious and mainly relies on the author's obfuscation. But it's a very short story that yet packs some punch. Quite fun.

A man bets his old friend that he can manage to steal a document from his locked and sealed vault, and sure enough, when the friend opens the vault the document is nowhere to be found.

I liked this. The hiding place is quite obvious for a reader who's well versed in the impossible mystery genre, but it's still wonderful in all its simplicity.

Brittain is one of the impossible mystery stalwarts. Not as prolific as some of the more well-known names, but his stories about teacher Mr. Strang are quite good. (The ones I've read, at least.) In this case, Mr. Strang goes on a field trip to a museum with his class, and while there a valuable mask disappears and two of his students are accused.

A prosaic and simple story, but quite good. The hiding place is rather apt and Mr. Strang's reasoning is strong.

Michael Collins - "No One Likes To Be Played for a Sucker"

Hard boiled private detective Dan Fortune gets to investigate when a jeweler suspects his partner of hanky panky. But then someone tries to rob their store and the partner is killed...

I'm not all that fond of pure hard boiled stories, but this was all right, I guess. It's not particularly hard to find the villain of the piece, and the solution to the impossibility is not fantastic either.

A man on death row is about to get hanged when he suddenly vanishes in the middle of the ceremony, and his body cannot be found anywhere.

A fantastic impossibility and a true classic of the genre. The solution is a bit elaborate, but I guess the impossibility needs some elaborateness to actually be possible...

Two policemen arrive to investigate a crime scene where a husband is found in a locked room with his dead wife. They're not really happy with the situation, because the whole thing seems rather too pat.

Another good 'un. The whole structure is quite reminiscent of "Proof of Guilt" by Bill Pronzini. A really good story and the impossibility is explained in a fun way.

Breen's usual detective, baseball umpire Ed Gorgon has to solve a case where a player leaves the pitch and goes into a closed off corridor, but vanishes before reaching the end. And then he is found dead in the umpires' shower room.

The impossibility and the solution is pretty good, but the whole story is let down by my immense disinterest in baseball and all its trappings. If you can get past that, this is a good impossibility.

A magician is doing his routine at a police benefit, and during his show an explosion takes place and his wife disappears.

A good set-up, and as I've said before, including a magician in an impossibility almost always improves it. The misdirection is pretty good, but relies on the same trick that I've derided here several times before.

Edward D. Hoch - "The Problem of the Covered Bridge"

There are a lot of very fine stories here, with the ones by Pronzini and Pentecost being the absolute top. The only letdowns come fairly early on with Simenon's and de la Torre's tales. The rest vary from good reads to the absolute classics I've already mentioned.

I'm going to use all stories here except the aforementioned letdowns, Collins's hard-boiled story, Asimov's non-fair play story, and Breen's baseball story - the latter not because it's bad but because it's too baseball-y.

TomCat reviewed this volume over on Beneath the Stains of Time: http://moonlight-detective.blogspot.se/2011/05/nothing-is-impossible.html
Posted by Christian_Henriksson at 15:42