Martin Edwards is a most prolific author, editor, blogger, you name it - and that's only in our field of interest! As the curator of the very successful British Library Crime Classics series, including a number of anthologies edited by the man himself, he's well worth the epithet "The British Jan Broberg". :)

This anthology is - so far - the only one in that series that entirely focuses on impossible crimes, but there are a bunch of other themed anthologies (country house murders, Christmas murders, etc.) in the same series.The focus of this particular volume is on British writers, and to some extent on early 20th century authors. 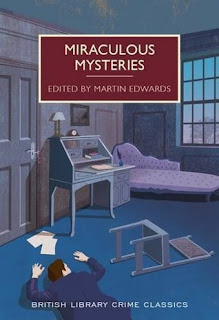 Carnacki the Ghostfinder describes a case where he investigated the stabbing of a man by an invisible killer.

There is too much focus on the supernatural - though the solution is entirely natural - for me to be entirely satisfied with this. The explanation for the impossibility seemed to me a bit too technical, though workable. But the most disappointing bit is the identity of the villain and his motive.

Sax Rohmer - The Case of the Tragedies in the Greek Room

The clairvoyant Moris Klaw explains how a man could have been murdered in the titular room of a museum.

In so many early 20th century mysteries, the sleuth had to be so very original that they were endowed with one outrageous characteristic after another. This is no different, and it does get a bit tiring. Cheers to E. C. Bentley for showing a different way. What about the story itself? Well, it's pretty bad, to be honest. The explanation to the impossible murders is really poor, relying both on an instrument of death that is ludicrous and the perpetrator's behaviour - the whole reason for the murders - is something that should never be used in a mystery story.

Set in America, this story tells the tale of a millionaire who disappears from his apartment several floors up. Then his body turns up some time later, hanging from a tree.

How I wish that one of the later masters of impossibilities had written this. What they could have made from such a setup... Chesterton on the other hand resorts to a fairly silly scheme as the explanation to the impossibility. As usual, the incredible stupidity of everyone who isn't Father Brown is really notable.

A consulting engineer is killed by a blow on the head while testing a machine. The last man to see him has no weapon on him, and none can be found in the room where the engineer was found either.

This story has a really clever solution, and is a clear step up from the previous stories. A good read.

Marten Cumberland - The Diary of Death

An old courtesan has died, and in her diary she names several persons that she thought didn't do enough to help her while she was down and out. Now someone is killing these people, one after another. The latest murder takes place in a country house where a man is killed in a room where all doors and windows were locked.

I wish the solution had been married to a better tale. It's an incredibly easy and ordinary solution (fairly easy to guess as well), but in a better story with some better misdirection I think it could have worked. However, here it's almost impossible to miss what is going on, especially since Cumberland hides his killer very badly - he wouldn't have been more obvious if he'd stated outright "This is the killer".

A radio announcer is interrupted in the middle of a broadcast, yelling for help. Then he vanishes from the hermetically sealed radio studio where no one else was present.

Another good story with a solution that's admittedly fairly easy to spot. I liked the set-up and the detective of the story and found it a good read on the whole.

There is a ghost story about a murder in the titular room. The new tenants poo-poo the story, but one night a young man is killed in the same room by a falling chandelier.

This is another story with an incredibly obvious bad guy. And the explanation of the killing involves something that's never been my cup of tea. So on the whole not a particularly good story.

A serial killer is targeting the Home Secretary, threatening to kill him at half past eight one particular morning. He is therefore ensconced inside a glass room with people guarding him during the important time. And yet he dies from poison at exactly 8.30.

I thought the explanation for the impossible murder was actually quite clever. But unfortunately the rest of the story is let down quite a bit by being written in a fairly boring way. There's really no detection and no clueing present.

Dr. Benjamin Tancred tells the story of how he immediately suspected a pubowner of being a murderer when his brother-in-law was killed in a room on the upper floor, even though the pubowner was downstairs with him at the time.

My main complaint here is that I prefer to read mysteries the normal way - first a murder occurs, then someone investigates and detects, and then we finally get a solution. I've already mentioned that I'm less interested in inverted tales or stories where everything is just told in real time, as it were. If you didn't guess, this is another example of that type of story. Otherwise, I thought this was fairly clever. The explanation to the impossibilities isn't bad at all.

A man is shot and killed inside a locked room, and suicide is the first suspicion. But there are some signs that there may be more behind the story.

Nope, this type of solution really doesn't do at all. It's an incredible letdown when a locked room turns out to be not locked at all because of this particular arrangement.

PC Burt is haunted by something that happened to him one night. He runs into Lord Peter Wimsey and tells him the story when he heard someone yelling out "Murder!" and yet when Burt reaches the house, no one admits to the shout. And when he returns with his superior, they can't even find the house in question.

This is rather on the slight side - Sayers had very few impossible crimes in her oeuvre, and most of them are on quite slight. I also think it's overlong for what it actually contains - as a vignette it would have fared better.

Michael Innes - The Sands of Thyme

Appleby tells the story of a man who was killed on the beach with no footprints from the killer.

Heh, I actually smiled at the twist towards the end. On the whole, it's all rather inconsequential, but I thought the setup was pretty good. Silly, but rather fun.

Edmund Crispin - Beware of the Trains

A married couple has completely disappeared from their house one morning. A relative comes to visit for breakfast - as usual - but even though the table is set, no one is present in the house.

Is this really an impossible tale? I don't see it. It's bizarre and a bit crazy, but there's really nothing impossible about the situation. I thought the solution was pretty good, although perhaps a bit on the obvious side.

This is another anthology that is let down a bit by an overreliance on early 20th century stories. I acknowledge that some of them are classics and originators of the genre, but they are generally a bit soft on the impossibilities. But there are some good stories as well here, and even though the stories may not be the greatest, it's still interesting to read them for an impossible mystery aficionado.

So, from a historical viewpoint this is wholeheartedly recommended. Just don't expect the cream of the crop when it comes to the impossible bits.

I managed to find two stories that I enjoyed enough to include them in my project. Those two are: "Invisible Weapon" and "Broadcast Murder".

This volume has been discussed by TomCat on Beneath the Stains of Time: http://moonlight-detective.blogspot.se/2017/04/wanton-wonders.html
And here's what the Puzzle Doctor said over on In Search of the Classic Mystery Novel: https://classicmystery.wordpress.com/2017/05/25/miraculous-mysteries-edited-by-martin-edwards/
Posted by Christian_Henriksson at 15:34