In my last post on a Martin Edwards edited anthology, there were a lot of country house murders. However, I can promise there will be even more of those in this one!

This is another anthology centred around a setting, rather than a plotting genre. Again, this will undoubtedly make the stories a varied bunch. Otherwise, Edwards uses the same set-up as always, some famous authors and some less well-known ones, ordered in a roughly chronological order.

So let's move along and see how this one compares with the previous anthology. 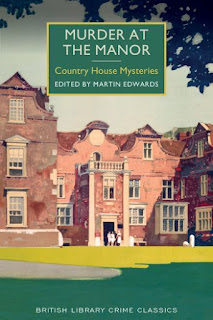 Sherlock Holmes gets a visit from a young woman who's been employed as a governess, but her employers are giving her increasingly strange instructions on how to dress and look. She is feeling more and more uneasy, and Holmes agrees to investigate her case.

Like the previous collection, Edwards finds a great Doyle story to start this anthology off. It's one of my favourite Sherlock Holmes stories. It's hardly fair play, but as I've said before that hardly matters when Doyle is firing on all cylinders.

At a dinner party at the Tranklers' manor, one of the guests walks out into the garden where he is later found dead through poisoning. A few years later, Trankler's son dies during a hunting party in the same gardens. And then the rumours start spreading...

This wasn't the best of stories, to be honest. It's a bit too reliant on shocks and thrills and is also very 1800s in its style. Again, not a fair play story, but unlike Doyle, Donovan doesn't have the panache to hold my interest.

Gentleman thief Raffles and his friend and accomplice Bunny are invited down to Milchester Abbey to play cricket against some local teams, with the secret motive of stealing some jewels. However, it turns out that the police are on the trail after other prospective jewel thiefs, making Raffles' coup more dangerous.

So, yet another story that is not really a mystery, just an adventure. It's fairly amusing and zips along quite nicely, though.

A young man is threatened and blackmailed for a large sum of money, but resorts to murder to escape his tormentor.

This is even less of a mystery, simply a kind of psychological thriller with some horror elements. Not my type of story at all.

Two clever young men join the celebrated Dr. Adrian Hyde in investigating a murder where a man has been bludgeoned to death and then ended up floating in a lake. They are both sent down to White Pillars, while Dr. Hyde acts as an armchair investigator.

Well, this is a bit more like it. The ending is quite good, though I must admit I was always suspicious of the person who turned out to be the culprit.

Bramah's blind investigator, Max Carrados, is asked to come down to Dunstan's Tower by Dr. Tulloch, an old friend of his. It appears that there is a haunting attached to the Aynosforde family, and Dr. Tulloch held a nightly vigil by the haunted staircase yet did not notice how a pool of blood could appear there.

Bramah can generally be relied upon to provide proper mysteries, but this is not much more than a Gothic horror story. At least Carrados works out part of the solution from clues provided. The best thing about it I can say is that it's not the worst story so far in the collection, but it is quite possibly the biggest disappointment.

An elderly gentleman has been killed in the titular Manor House. The detective on the case gets visits from several of the people involved in the case, each of them proceeding to tell their part of the story.

A somewhat differently structured story from one of the biggest names in the field before Christie and Sayers started writing. I can't say that I found the structure all that successful. The reader can hardly be expected to solve it from the clues provided. Interesting, but flawed.

J. J. Bell - The Message on the Sun-Dial

A ne'er-do-well has been misusing his cousin's name and forged his checks and is therefore prompted to leave the country by that gentleman. Instead, he decides to kill him, and does so in the cousin's garden. Unfortunately, there's a dying message left by the unlucky man...

Well, this has a couple of things against it already from the start: it's got a very similar plot to a previous story (though it flips who is the culprit and who is the victim), and it's also an inverted mystery story. The dying message itself is fairly easy to see through - in fact, so easy that the author only allows the characters to read it out aloud to begin with. It's not a bad story, but I'm not particularly happy with the anthology this far.

Sapper - The Horror at Staveley Grange

Several male members of a family have died suspicious deaths, while sleeping in the same room, and Ronald Standish is asked by a friend of the wife of the next in line to take a look at the case.

So, written by a fairly hokey writer, with a hokey title and, as you see, a hokey plot. And yet... it's not all that bad, to be honest. It's rather too similar to a couple of Sherlock Holmes stories, though, but it's an okay impossible crime by an author who you'd never expect to write something of that ilk.

A young man sees his cousin lying dead on the road while walking home at night, but it turns out that the cousin is alive and well in Italy. But then he sees the cousin dead again... and again. All signs point to him being afflicted by some mental disorder, but his wife believes in him and asks for Roger Sheringham's advice.

This is by far the longest story in this anthology, close to novella length, but it's also a very good one. Yes, the plot is not that hard to see through, but Berkeley still manages to keep the reader guessing about several plot points. Finally a really strong story. The only drawback was that I had read it before...

Sir George Winthrop-Dunster attracts the ire of his secretary, and the latter crafts a perfect plan to murder him.

Another non-mystery, this is one of those Francis Iles "anatomy of murder" things. Well-written, but again, not my cup of tea at all.

Margery Allingham - The Same to Us

There's a weekend party at Molesworth House, with the guests invited by the lady of the house. Unfortunately, during that weekend her jewels are all stolen.

This is not much more than a humorous vignette, probably all written to be able to use that final line... One has to wonder what happened to poor young Petterboy. A fairly amusing tale, but this anthology is truly scarce on meatier material.

E. V. Knox - The Murder at the Towers

Mr Ponderby-Wilkins is found dead, hanging from a tree at his enormous estate, and inspector Blowhard is brought in to investigate the case.

Now, this may just be my favourite tale in this anthology. It's an out and out parody of real country house mysteries, but since there is such a paucity of such stories here, this gets even better. And the best thing is, the reader only needs to read the first two paragraphs to see whether this is something for them.

Two nurses are in a remote house, taking care of an old professor who is suffering from gas-poisoning. Unfortunately, there's been reports of several nurses being killed in the county...

White is a good writer, but a good writer of stories I don't care for. It doesn't help that I immediately saw through what was going to happen - it felt much too obvious.

Nigel Strangeways is a guest at Gervase Musbury's place, and while there some of the guests watch as others shoot arrows towards the sky while the sun is sinking. But when the final arrow is fired off and falls down towards the earth again, it strikes a tree and Gervase falls down from it - dead from poisoning!

This is a fine little tale, not too long but does exactly what it sets out to do. Finally a fair play plot for the reader to try to play along with.

While handling a case of a husband and wife who have died, lawyer Henry Bohun is intrigued by some old notes of a previous death in their family. He contacts the old man who had written those notes and gets to hear a tale of murder.

Not a bad story at all, there's both a fair play plot and a bit of a sting at the end. Gilbert can generally be relied on for good story-tellling, and this is certainly no exception.

Well, this wasn't the best anthology for me, I'm afraid. There's way too few fair play stories, and too many stories that belong to other crime genres. The few real mysteries there are, are generally good. And most of the good stuff comes towards the end, which makes me remember the book a bit more fondly than I'd otherwise do, so I guess that's something in its favour.

But on the whole, I just thought there were too few "true" country house murders here.

On In Search of the Classic Mystery Novel The Puzzle Doctor liked this a bit more than I did, though he had some reservations.

Aidan's review over on Mysteries Ahoy is very thorough, and we seem to have similar reservations, though we aren't always in complete agreement on which stories are the better ones.
Posted by Christian_Henriksson at 15:01