The Long Arm of the Law (ed. Martin Edwards)

And here we have another anthology in the British Library Crime Classics series. As the title indicates, this is a collection of stories featuring the police in different roles.

Otherwise, this - as we should be used to by now - has the same structure as other BLCC anthologies: a mixture of stories from different genres and times. For once, the opening story is not by Sir Arthur Conan Doyle, though. 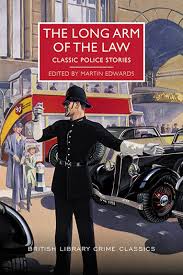 Alice and Claude Askew - The Mystery of Chenholt

Reggie Vane has been given charge of a local police station, and one day he is approached by a butler who reports that he is suspicious of his master, a Mr Darrell, whom he suspects of harbouring plans to poison his wife. As it is difficult to find hard evidence of the butler's suspicions, Vane tasks his fiancée Violet with joining the household to see what she can find out.

This was a bit ho-hum. It's hard to imagine how a police could get away with sending in a female non-police into a household where murder is suspected. It's all a bit improbable. The "surprise" ending didn't come as much of a surprise, either.

PC Lee tells the story of his taciturn colleague Hirley and the case where they both were involved in the investigation of a murdered man. It's a crime where Lee had seen a young man enter a house, and because his suspicions were aroused Lee followed him a minute later, then hearing an awful yell from the second floor. After ascending, he finds the body of a man with a gunshot to the forehead.

This isn't quite an impossible crime - more an improbable one (how on earth could the murderer get away so quickly?) - but being so short, this tale gets the explanation in quickly, showing Hirley's superior reasoning skills over Lee's. An all right vignette, fairly entertaining.

George R. Sims - The Mystery of a Midsummer Night

Inspector Chance investigates a kidnapping case where a four year old boy has been taken from his bedroom at night without anyone hearing anything. His body is later found in an outhouse on the premises.

This is a run of the mill police procedural story, though of the type that was common during the earliest few decades of the 1900s. There are not many surprises here, and even less so since the foreword tells us which famous real life case the story is based on. I don't mind having read this story, but I guess that's damning it with faint praise...

In this story, a journalist is interviewing Inspector Morton and asks him about the cleverest clues he's come across during his career as a police officer. He recounts the tale of the kidnapping of a professor who's working on an invention that is set to revolutionise aerial warfare thoroughly.

This is rather amusingly told, but there's never any doubt about what's happening (or what's going to happen). Nevertheless, the titular clue is actually quite clever, though rather farfetched as well. I'm guessing most people would never get it - I take some comfort in being a foreigner, who will have a tougher time than most. Another story that was an okay read, not much more.

The titular Mr. Dawes is a fence, who induces one of his thieving acquaintances to break into a jeweller's and steal some of their wares. But Superintendent Budd is on his trail...

Another fairly amusing but never mysterious story - there's no detection here either. I liked this a bit less because it's a story of entrapment, and thus would never be allowed in court today.

Roy Vickers - The Man Who Married Too Often

Molly Webster manages to marry a Marquis who's rather too stupid and naive, and then of course it turns out that the Marquis had been married before. And when the previous wife turns up in their neighbourhood, what's a Marchioness to do to protect her young son?

Another story about a crime, and an inverted one at that. And just like the previous story, this is a tale of entrapment and it also features a bit of a nasty sting towards the end. I didn't like this at all.

An old man has been found dead from a gunshot wound, and everything points to it being suicide. But Inspector Slade has seen some things that don't quite add up.

Well, finally a story with detection and some fair play clues! This wasn't bad at all - it made me want to check out Gribble's "The Arsenal Stadium Mystery". The interplay between the policemen Slade and Jerrold gives this something a little bit extra, at least for this reader.

Jim Crouch has decided to murder his uncle, being his only heir and needing the money because of a needy girlfriend, and sets things up as neatly as possible to escape suspicion.

That's sort of plot 101 of inverted mysteries, and there's absolutely no surprises here. Even the mistake that the culprit makes is probably among the top 5 mistakes that you've seen in mysteries like this one. So it's fortunate that it's so short, it certainly doesn't overstay it's welcome.

A police constable overhears a rather suspicious conversation at the pub one night, and commits this to memory. Some time later, he comes across one of the conversationalists in conjunction with a death that looks like an accident.

So, this was actually an impossible crime! Yay! I'd have liked it more if we weren't told from the outset who the culprit was, leaving only the murder method unexplained until the end, but this was still an enjoyable read. Admirably short as well, and manages to get everything done anyway.

Constable Bragg and his new superior, Detective-Inspector Hurst, are investigating a case where a man was found dead with his head in the oven. At first, most things point towards suicide, but Bragg has his suspicions.

This was another story I liked quite a bit. There's never really any surprise in who's guilty, but Wade manages to still inject the story with some liveliness and interesting points, keeping my interest up throughout the whole thing.

Christianna Brand - After the Event

Inspector Cockrill and several other guests at a dinner are regaled with a tale from a Grand Old Man about a murder in a theatre. Of course, Cockrill sees through everything and manages to figure out who the culprit is only through the clues he hears about.

I had read this before, but it's still a great tale. I like the whole setting with Cockrill acting the armchair detective, and Brand manages to get quite a lot of humour from this. Lovely stuff.

A blind man is always helped by his cousin, led around everywhere, but one day, there is a terrible car accident where the blind man narrowly escapes but his cousin dies. But was it really an accident?

Blake does well in under five pages here. He manages to get in one important clue. The plot isn't all that difficult to see through, but at least it's still a fair play one.

Chief Inspector Roger West investigates what seems like a crime of domestic violence where the husband has killed his wife, leaving his young son to discover the corpse the next day.

A fairly good one, this one as well. This might be the most police procedural-ly of all the stories here. It's not particularly fair play, and I don't think it's all that hard to see where things are going, but still a good read.

An old sweet-seller has died, and when his charwoman is tidying up after him she finds the body of a dead woman in the cellar. Inspector Petrella starts investigating, and soon he finds signs that point toward a previous tenant, who lost his wife during a bombing in WWII.

The streak continues with another eminently readable story. Again, I managed to see through the "twist", but this time I'm actually proud of it, because I think it's better hidden than in the previous stories.

A policeman has been found unconscious, knocked out next to his motorcycle. Now Sergeant Cluff and his colleagues must find out if it was an accident or something more sinister.

This is a poorly written story, where it's almost impossible to follow what happens. So much goes unsaid that I had to go back a couple of paragraphs every ten seconds, or at least so it felt. Hopelessly bad.

In all, I liked this quite a bit, though it had a bit of a rocky start. I think it's safe to say, from the reviews I've had of the BLCC anthologies so far, that I think they improve towards the end (though this particular one had a very bad ending story). I guess that's not too surprising, given my liking for GA mysteries and less-than-fondness for the writings of the late 1800s and early 1900s, and the fact that these anthologies are ordered more or less chronologically.

By now, I think it's time for a ranking of the BLCC anthologies I've reviewed so far.

1. Miraculous Mysteries - no surprise there, this is an impossible crime anthology, so it has lots of things going for it that elevate it above all the other collections.
2. Silent Nights - very close in quality to TLAotL, but I think this one just pips it. A good variety of stories and a few really good ones.
3. The Long Arm of the Law - starts off spottily, but gets better and better, and even though it finishes with one of the worst stories I've ever read it's still distinctly above average.
4. Murder at the Manor - I was thoroughly disappointed that this didn't feature any true country house mysteries. I think there was one fair play mystery among the whole bunch of stories.

Kate was very impressed with this collection over at crossexaminingcrime. And Aidan had several good words for it over on Mysteries Ahoy.
Posted by Christian_Henriksson at 12:27