This collection of short stories, nearly all of the impossible crime variety, was published by Locked Room International in 2017, in translation by Ho-Ling Wong (of The Case Files of Ho-Ling fame). Osaka wrote these tales over a period of 15 years, during the 1930s and 1940s. Some feature a couple of different series detectives, while others are stand-alone stories.

I had mixed feelings about this collection. We'll come to my opinion on the specific stories below, but my main problem was with the writing. I don't know whether it is Osaka's writing style or the translation - though I've read other translations by the same translator where I didn't have the same problems, which points to the author in this case - but it was a tough slog to read. I had to put it down every few pages, which meant that I couldn't generally finish even one story in a sitting. However, it should be said that comparatively, LRI's publications have more words per page than most other books, so that's at least part of the explanation.

Still, there were definite qualities in the plotting and the explanations of the various impossibilities, so let's get down to specifics. 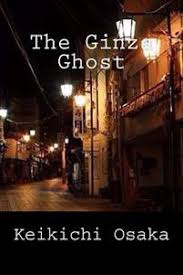 We begin with "The Hangman of the Department Store", the first story Osaka ever wrote. A man is found strangled to death and with several mysterious wounds on his body. It seems he was thrown to the ground from a department store roof. According to witnesses, there was no opportunity for anyone to enter the store, but at the same time it seems none of the people inside the building could have been responsible either.

It's a pretty fine problem Osaka has created here, and seeing that it's his first story I'm okay with the solution. There's some innovative enthusiasm here, though like some other stories here there's some coincidence required for the solution to work. But definitely a good start to this collection.

In "The Phantasm of the Stone Wall", a woman is murdered on a walkway in front of her home, and witnesses see two men flee from the scene along the road. However, a man walking in the opposite direction claims that he saw no one pass.

This is yet another great set-up, and I think Osaka found a good solution to the impossibility here.  Finding the culprit isn't all that hard, if you've read a couple of impossible crimes before, but the explanation to the disappearance is clever and innovative.

The third story is "The Mourning Locomotive", wherein we're told about a specific locomotive that regularly manages to run over pigs on its travels, always with the same drivers.

Here's where the wheels start to come off. This story is bonkers. Yeah, you might call it innovative, but to me it just doesn't work. People just don't behave this way - unless the differences between Japan and Sweden are bigger than I imagine. The preface says that this is Osaka's masterpiece, but I definitely disagree.

Osaka seems to have liked lighthouses, because "The Monster of the Lighthouse" is just the first story to feature such a structure. In this particular story, the top of the lighthouse is destroyed by a large rock and an octopus-like monster is seen diving into the sea. And at the same time, the lighthouse keeper disappears without a trace.

So, some obvious horror and/or supernatural elements in this story. I definitely felt this worked better than the previous story. It has to be said, though, that the specifics of the solution are a bit convoluted and require a bit of coincidence.

There's more supernaturalisms in "The Phantom Wife" where a servant tells the story of how his mistress took poison after having separated from her husband. The husband is haunted by this event, avoiding everything associated with the wife and looking more ill with each passing day. And then one day the servant finds him dead and the killer seems to have superhuman powers, as he wrenched the iron bars of the window out of their sockets.

We're back to stupid again here. This is not an impossible tale, and therefore there's not even the mitigating factor of a thoughtprovoking impossibility. The attempts at trying to apply supernatural explanations for the murder make me roll my eyes, and the final solution is so, so dumb.

"The Mesmerising Light" is by comparison a much more mundane tale, where a car disappears from a stretch of road between two toll stations. And then it turns out that a guest has been murdered in the home of the car's owner.

The solution to the impossibility of the vanishing car is good, perhaps even great. Osaka's explanation probably would have worked in the real world. But the rest... No, I'm not impressed. The motive is pretty hokey and the bit about the age of the culprit is both non-fair play (because of cultural differences) and super stupid.

In "The Cold Night's Clearing", a teacher is called to a colleague's house, because a young student has found a horrible crime scene there. The colleague's wife and her cousin are both found dead, murdered after a violent struggle. But not only that, the six-year-old son of the house is nowhere to be found, and outside the house is a single track from skis which just suddenly end in the middle of a field...

This is a lovely set-up, which is why it feels like a cheat when the explanation comes. It turns out that the whole thing is not an impossible situation at all, our narrator simply didn't tell us everything. It's a fairly powerful story nevertheless, with a sad and tragic ending. So much potential squandered here...

"The Three Madmen" are all inmates at an asylum, and one morning the staff wakes up and finds that they are all missing, as is the chief doctor. He is found some time later, horribly mutilated and with his brain missing.

Yeah, so that's a fairly grisly business. Still, that leads the reader's thoughts towards a certain conclusion... The main thing this story has going for itself is the way it's narrated, which creates an almost surreal atmosphere. If not for that, I think almost everyone would see through the misdirection here.

We return to the world of lighthouses with "The Guardian of the Lighthouse". In this story, there are two families sharing the task of lightkeeper on a remote island: a husband and wife, and a father and son. The husband has been taken to hospital, and his wife accompanies him. When he's recuperated, the father takes the boat to fetch them back to the lighthouse, but they are delayed over night because of a storm, and when they return the son has vanished. And yet the lighthouse has been functioning the whole time...

This wasn't too bad - a bit prosaic, but Osaka manages to squeeze out some thrills by the way he's describing events. The explanation to the disappearance is quite plausible, and also quite poignant.

"The Demon in the Mine" gives us a problem where a man is left behind during a fire in the mine, when the rest of the workers get to safety behind a fireproof door. When everyone returns, one after one are murdered, and it seems as though the man left behind is picking off those who were responsible for shutting him in the mine.

This was quite possible the cleverest story in the collection. There's some extra sense of danger in the story because of the terrible conditions down in the mine. And Osaka conjures up some fine misdirection before revealing who the killer is. I'm not going to say that it couldn't be deduced beforehand, but the whole thing's still quite impressive.

In "The Hungry Letter-Box", a man posts a letter in a letterbox, but then remembers he forgot to put on a stamp. The letterbox is locked, and cannot be opened until the next morning when the mailman comes - and yet the letter has disappeared when the box is opened!

This is a tale with a lighter touch, and it's all the better for it. The explanation to what's going on is quite workable. The motive for it all is more or less impossible to work out, on the other hand.

The final story here is the story that gave its name to the whole collection, "The Ginza Ghost". In it, two women are killed, with witnesses saying that one of them killed the other and then killed herself - however it turns out that the woman who the witnesses say died first survived the other by more than 30 minutes. But surely it couldn't be a ghost who killed?

Another pretty clever explanation here, and the misdirection Osaka employs works very well. A good finish to this collection.

There's some very bright spots here, but also quite a lot of messy stuff. There's some overreliance on superstition here, and I don't know, maybe it's a cultural thing, but I just don't see how so many people, particularly professional police officers, should be so gullible and believing in that stuff. In many of the cases here, the only reason that the truth isn't found is because everyone focuses so hard on the supernatural things.

One example is from the final story, "The Ginza Ghost" - I'm not sure that the whole thing would stand up to scrutiny. There's just one thing that makes the witnesses identify the killing woman, and seeing that it's all a big contradiction, surely the police should be able to reason out what actually happened? But perhaps I'm just a bit too annoyed with some of the trappings here.

My preference is for the stories that don't focus too hard on that stuff and rely more on "normal" mystery tropes with an investigation and deductions from the available facts. For a reader who enjoys stories with ambiance, this collection will surely be even more impressive.

But it should also be said that most of the stories here have parts that are very good, it's just that I find that Osaka seldom manages to get everything to work.

Seeing that this is a collection of impossible mysteries, I will use a couple of the better ones for my project: "The Phantasm of the Stone Wall", "The Demon of the Mine" and "The Ginza Ghost".

Out in the blogosphere, most of the words on this collection have been very kind:
TomCat praises it effusively on Beneath the Stains of Time, while J. J. is very complimentary in his review over on The Invisible Event.

Meanwhile, Aidan over on Mysteries Ahoy joins me in taking a more reserved stance, though we're not entirely in agreement on which stories deserve praise and which do not. It seems everyone except me likes "The Mourning Locomotive"...
Posted by Christian_Henriksson at 11:33