We return with yet another anthology from the BLCC series. This is the second Christmas mystery anthology in the series - though this one is actually subtitled "Winter mysteries", so the scope is a bit broader than "just" Christmas mysteries.

But winter is an excellent setting for mysteries, what with all those footprints in the snow that are missing or misleading and so on, so opening up that possibility should really be to the advantage of this collection.

Otherwise, by now you should be familiar with the general layout of a BLCC anthology. A varied bunch of stories, roughly chronologically ordered with household names mixed with more unknown ones.

Still, with the previous Christmas anthology Edwards exhausted his supply of good Sherlock Holmes winter mysteries, so how will he fare here? Let's move on to the individual stories and see. 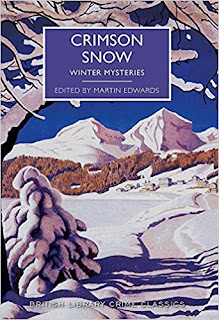 Lascelles, a returned army doctor, runs into Percy Ringan, an old acquaintance who invites him home to his family manor. It seems that the estate is owned by Percy's brother Frank, who is poor, while the more affluent Percy helps support the upkeep of the estate. And that's the recipe for sinister events...

There are absolutely no surprises whatsoever here. Events unfold exactly as you would imagine. Not an auspicious start to this collection of stories.

We are told the story of a young man who is somewhat of a gigolo, living on wealthy women and blackmailing them after moving on from them. But one day the husband of one of those women happens to open one of his blackmail letters, and soon thereafter our gigolo is found dead in the snow. But there is a wrinkle, there's another corpse next to him!

This was rather better. There's some cluing here pointing towards the culprit and I liked the "surprise" ending.

Margery Allingham - The Man with the Sack

Albert Campion is invited to the Turretts over Christmas, as both mother and daughter are having misgivings about the party they are going to have - though for very different reasons. Once there, a diamond necklace belonging to one of the guests disappears, along with other knick-knacks.

A fine Christmas tale from Allingham. I don't think anyone will be very surprised when the culprit is revealed, but there are some interesting twists and turns on the way to the conclusion.

Sherlock Holmes gets a visit from a young lady who tells a somewhat implausible story of the theft of a set of pearls.

This is a playscript with a touch of parody to it. It's light on deduction and heavy on Christmas sentimentality. All things said, not too bad, though not a highlight either.

Chief Inspector "Ironsides" Cromwell is going, along with his well-born Sergeant Johnny Lister, to the latter's family home over the Christmas holidays. But outside the Lister's home they see a creepy figure stealing about in the snow. And inside the family manor is the "Death Room", where one of the guests has been put up for the night...

This is the longest story in this collection, by far - it takes up almost one quarter of the whole book - and it's to Gunn's credit that he makes the story work quite well from such a hoary set-up. Gunn piles up the melodrama and the ghosties and ghoulies. Again, I defy anyone to not spot the villain, but on the whole I liked this quite a bit.

An old swindler has been strangled, and Ludovic Travers, who is in town for the holidays, begins investigating in concert with his old friend, Chief Constable Valence.

This is one of those unbreakable alibi type stories that Bush does so well. This is a short tale which quickly gets in and out and is all the better for it.

Ianthe Jerrold - Off the Tiles

An old woman has been killed by falling off the roof of her house. The police are originally willing to write it off as suicide, but her sister insists that they must investigate it as a suspicious death.

Not the most involved tale I've read. Jerrold has written what might be called a meat-and-potatoes mystery. It's a perfectly fine story with a perfectly fine solution, but there's not much to make it stand out.

A hotel manager and two electricians have to break into a hotel guest's room, and inside the guest is lying dead, horribly battered to death. At the same time, two famous film stars - owners of some fabulous jewels - have still not turned up at the hotel, despite having booked long beforehand, and to top it all up, insurance manager Mr. Cork is coming to stay at the hotel. He receives the dead man's room and begins investigating.

This was a rather good story, I thought. The plot is a bit run of the mill, but I thought the setting and characters made up for it. As long as you don't expect fireworks, this is a satisfying story.

Francis Quarles has been asked by Lord Acrise to investigate the threatening letters the latter have been receiving. There's going to be a dinner at the Robert the Devil restaurant, where the threat is supposed to be fulfilled - and unfortunately the old man dies from poisoning during the meal.

The Quarles stories are Symons best work - he'd no doubt disagree with me most vehemently - as they are proper, clued mysteries. This story consists mainly of setup, but it still works nicely. A fine addition to this collection.

Michael Gilbert - Deep and Crisp and Even

Detective Sergeant Peter Petrella is out carolling in his sparetime, but then it turns out that one of the people their group was carolling for was not the owner of that particular house. So Petrella rushes back, only to realise that it must have been a burglar. Petrella begins investigating, but isn't helped by the fact that he is hampered by the flu.

This was on the amusing side, though I was almost as confused as Petrella was before re-reading the final pages a couple of extra times to understand exactly what had happened. But that was just me being obtuse. Another fine story.

Old Mrs. Fairlands is alone in her house at Christmas when a gang of burglars force entry by pretending to be carol singers. She refuses to tell them where she's put her money and jewels, and they tie her up and gag her and leave her alone in the house when they leave.

This is a horrible story. It's powerful and well-written, but I thoroughly hate this type of story. It doesn't help that I'd read it before either. For aficionados of suspense thrillers, probably a highlight though.

On the whole, I liked this winter collection quite a bit. Really, it's only two stories that really leave me cold. So it's a bit unfortunate that they are the first and last stories here. But the rest of the anthology is perfectly fine. The main drawback may be that there is no extreme highlight - instead the collection relies on stories of a uniform and constant standard. That might sound a bit lukewarm, but I think anyone who likes short stories should feel perfectly satisfied with reading the stories here.

TomCat over at Beneath the Stains of Time liked this anthology quite a lot, and the Puzzle Doctor even raved a bit at In Search of the Classic Mystery Novel. And on Mysteries Ahoy, Aidan too liked it a bit more than I did.

And finally, the BLCC anthology ranking!

1. Miraculous Mysteries - no surprise there, this is an impossible crime anthology, so it has lots of things going for it that elevate it above all the other collections.
2. Silent Nights - the quality of the collections here in the middle of the list is fairly uniform, but I think this one just manages to go to the top. A good variety of stories and a few really good ones.
3. Blood on the Tracks - a collection with few standouts and some truly bewildering inclusions, but on the whole it was still a worthwhile read.
4. The Long Arm of the Law - starts off spottily, but gets better and better, and even though it finishes with one of the worst stories I've ever read it's still distinctly above average.
5. Crimson Snow - a rough start and ending to this anthology belies the fact that it collects a solid bunch of stories, perhaps only marred by the fact that there is no true highlight here.
6. Murder at the Manor - I was thoroughly disappointed that this didn't feature any true country house mysteries. I think there was one fair play mystery among the whole bunch of stories.
Posted by Christian_Henriksson at 14:03