Agatha Christie 100 - The Secret of Chimneys

In the early part of her career, Christie would often take turns between writing pure mysteries and adventure thrillers, often with a hint of romance in them. This novel belongs to the latter category, her third such novel after The Secret Adversary and The Man in the Brown Suit. 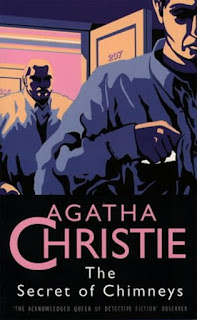 Anthony Cade, a man with a chequered background, undertakes to transport a manuscript of delicate nature from southern Africa to the publishers in London. Meanwhile, there is a political storm brewing in the state of Herzoslovakia, where the former king and queen have been murdered, but plans have been set in place to restore the monarchy again. All these plot threads centre on a meeting at Lord Caterham's manor, Chimneys.

I was looking forward to reading this one, because I had forgotten a lot about it since last time I read it. I still remembered the big reveal at the end, but most of the twists and turns on the way there were lost in the fogs of time. I can't say that it lived up completely to expectations. It was a fun read, an easy read and hard to put down. But it's also fairly silly, and everything just turns out conveniently for the best whenever Cade - our protagonist - does something. There's no clueing, really, and the reveal of the different villains doesn't really hang on anything that Christie has set up previously.

Anyway, Chimneys is decidedly better than its immediate predecessor, The Man in the Brown Suit. It feels a bit more assured, and at least you get the feeling that Cade knows what he's doing some of the time, in contrast to Anne Beddingfield in the earlier novel.

I'd rate this a 39 out of 100. A whole mess of fun, but perhaps not quite what you're looking for in a Christie novel. But sometimes you want a distraction from the meatier fare, an amuse-bouche, and then you could definitely do worse than reading The Secret of Chimneys.


The Swedish title is simply a literal translation of the English one. This was another one of those early titles that had to wait a while until it was translated into Swedish, but Bonniers has made up for that by publishing a number of editions since then. The first one from 1948 has a cover in that style that we're beginning to recognise from around that time.It's good enough, I suppose, though it could definitely be mistaken for a youth novel. The Zebra cover from 1960 is one of their worst. It looks like a James Bond novel or something, and it doesn't help that it's quite cartoony.

And hey, here comes another bookclub cover! It's not the worst such cover I've seen, but why does every woman on these covers have an 80s hairdo? Let's move our gaze towards the 1991 cover instead, which is kinda fun with that cartoony eagle and the bloodstain. At least it hints at the international adventure mystery we know the novel contains.
Posted by Christian_Henriksson at 14:04