Agatha Christie 100 - The Man in the Brown Suit

The re-read continues apace, and we are now going to take a look at The Man in the Brown Suit. This novel, published in 1924, is Agatha Christie's second adventure story, following The Secret Adversary, which I will return to in a future post. 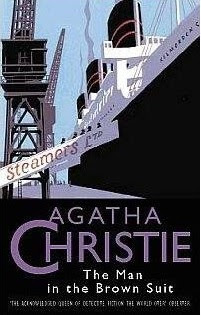 The novel introduces us to Anne Beddingfield, a young woman of no means whose father passes away in the early parts of the story. She is taken in by the family's London solicitor, and while in that big city witnesses a man falling onto the underground rails after which the body is searched by a man who claims to be a doctor, though Anne suspects otherwise. And then a murder takes place in a house belonging to Sir Eustace Pedler, a man of a lot more means who is just about to travel to South Africa. Anne manages to finagle her way into the coterie surrounding Sir Eustace and onto the ocean liner Kilmorden Castle where various mysterious events take place.

As mentioned above, this is an adventure thriller and definitely not a fair play mystery. This being Christie, there will still be some clues that will need solving, but even though Colonel Race - one of Christie's returning characters - is in this one, don't expect many deductions. Things just happen, mainly because Anne is a headstrong, impetuous character who's in a bit over her head. Though it has to be said that she learns from experience and by the time the novel ends she's come quite a way.

This is fairly typical of a 20s thriller, with lots of romance and incredible stuff happening over and over again. Though longer than The Mysterious Affair at Styles, it was a very quick read - a true page turner. A lot of fun, but on the whole fairly insubstantial. I'll give it a 30 out of a 100 - quite a bit below average for Christie. (Remember, the ratings only apply to Agatha Christie's works - if a novel gets a 30, it would probably beat a lot of non Christie works...)


The Swedish title, Mannen i brunt (literal translation: The Man in Brown), is obviously no improvement on the English - it's just shorter.

Fun fact: This novel was the last Christie novel to be translated into Swedish, and there are in fact only two Swedish editions of this story. (Yes, yes, if you want to count hardback and paperback as different editions, well, then there's more than two editions. But I tend to separate editions as publications with different cover art, and that is the definition I will use hereafter.)

I was actually not aware of the edition from this century before writing this post, but it turns out that it's a large print version published for some reason or other. It's as obvious and dull a cover as you can create, really.

The one I have is therefore quite obviously the earlier one, which has an evocative cover focusing on the elegant Anne and the ocean liner that features in more or less half the story. The covers for the 80s Christie publications in Sweden were created by an Englishman called Leslie Quagraine, and he has a fairly distinctive style which often produced fine results. This, for instance, is one I like.
Posted by Christian_Henriksson at 11:30