As most everyone in the mystery field will know, 2020 marks the 100 year centenary of the first publication of an Agatha Christie mystery. To mark this occasion, I have decided to try and re-read all Agatha Christie novels. If I am to read all 66 of them in a year I will have around five days for each novel. We'll see if I can keep up the pace throughout this year.

Accompanying this re-read I will try to make a post on each novel. I won't dwell too much on the contents - but I will give a summary and a short opinion with ratings out of 100 (very appropriately). Instead I'll focus on the Swedish editions of each story, the covers and some of the publishing history of Agatha Christie in Sweden.

My re-read will be in chronological order, however with a bit of a twist. As I mentioned above, there are 66 Christie novels. Exactly half of them are Poirot novels, so every other novel I read will be a Poirot novel.

As for the other books, I've divided them into three categories: Marples (12 novels), Tommy & Tuppences (4), and everything else (17). Hey, you say, why don't Battle or Race get their own categories? Just because. Race only has two starring roles, so that would be a pretty tiny category. And even though Battle has as many starring roles as T&T, I feel that the latter are much more distinct as their own thing. To be honest, the Battle stories could have featured really any copper and no one would notice any difference.

Anyway, I took these three categories of Christie novels and mixed them up, spreading out the two smaller categories so I never have to read two books from the "other" cathegory close to each other. Easy as a somewhat heavy pie.

And so, without further ado, let's get on with the first Agatha Christie novel ever published - The Mysterious Affair at Styles. 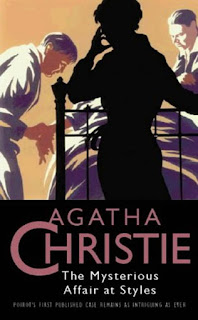 The story takes place during WWI, when Captain Arthur Hastings has been sent home from the front. He comes across an old acquaintance, John Cavendish, who invites Hastings to stay with him and his family at their family home, Styles. The mater familias, Emily Inglethorp, has recently married a much younger man, Alfred, much to the chagrin of everyone else in the family. One night, the old lady is found on the brink of death. She only manages to utter the name of her spouse before expiring. Luckily, in the village is an eccentric Belgian former policeman, Hercule Poirot, whom Hastings has had the fortune to meet some years earlier...

This is a very good debut from Christie. It's got a good cast of suspects - the whole family and friends living at Styles - and several good red herrings to divert suspicious towards many of them. It also has a very ignorant narrator in Hastings, who manages to misinterpret every situation it is possible to misinterpret. Poirot is fairly active in this one, running around and acting more eccentric than I remember him from other stories. The solution he produces is not bad at all and follows well from everything we've been told throughout the novel. I'd give this a 68 out of a 100. It's not absolutely top tier, but well above average. One of the best of Christie's first decade.


Agatha Christie's early Swedish publishing history is a bit chequered. This novel was actually not the first to be translated - it had to wait until 1929, when three other novels had already been published in Sweden. When it finally appeared, it received the title En dos stryknin (literal translation: A Dose of Strychnine). If you ask me, the Swedish title is a bit better, though none of them are fabulous. The English one is neutral to the extreme, almost sounding like one of those Victorian melodramas. The Swedish title isn't particularly alluring or eye-fetching, but at least it still conjures up an image of a mystery.

In Sweden, Agatha Christie was often published in different series. The main ones are the mid 60s Zebra series, Delfinserien from the 70s, and the simple Bonniers editions from the mid 80s. We've had several titles in the mid 10s lately as well. Unfortunately, I don't think any of these editions feature the complete works of Christie, which means that if you want to collect Christie's entire oeuvre in Swedish, you'll have to put up with owning books in quite different styles.

In this case, the edition I own is the paperback from 1963 above. I like that cover quite a bit. Like the covers surrounding it, it focuses on Alfred Inglethorp's sinister appearance. The name of the series this edition belongs to is clearly indicated at the top of the cover.

The 1972 edition belongs to Delfinserien. As you will see in future posts, I will generally gravitate towards this latter edition, because they are to me the quintessential covers. Delfinserien often featured somewhat surreal covers, with a very distinct look. The mid 80s covers are also quite good with the very distinct style the author's name is featured in. This one is actually one of the most non-descript of this series.

The two earlier covers are quite generic in my opinion, and quite what that train is doing on the second cover, I don't really know. The mid 50s cover is more indicative of the contents, and while not a favourite of mine is still perfectly all right as a cover.

As for the first two covers from this century, they're not to my tastes. The 2015 one is indicative of modern book publishing and doesn't appeal to me much, while the 2000 edition has a photography, which can be an effective cover in some cases, but this one of some coffee cups is a bit meh.

Finally, an anniversary edition came out in 2020, celebrating the 100 years since the novel's first publication. I like this one better than the previous one, though I could do without the black anniversary circle.