With this novel, we've reached the first of the milestones of Agatha Christie's long career. This is her first stone cold classic. Read on to find out what I thought of it. 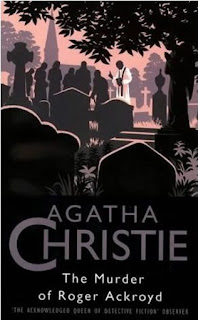 Hercule Poirot has retired to a small village in order to grow vegetable marrows, but is soon roped into helping out with a murder investigation. The titular Roger Ackroyd has been stabbed in his study, with the window open and conspicuous footprints outside. Since Poirot is now retired and Hastings has moved to Argentina with his wife, he gets help from the village doctor, Dr Sheppard, who narrates this mystery in Hastings' stead.

Yeah, this is still a powerful story. It towers above everything else from Christie's first decade of writing. There are a couple of other Christie novels from the 20s that are perfectly fine mysteries, but this is the only one where you see why she is hailed as the best writer in the genre. It is interesting to note that it will take a couple of years after this one before she gets really going again - arguably not until The Murder at the Vicarage.

The misdirection here is rather wonderful - though if you read it with a knowledge of the solution there are one or two passages where you go "Hang on, does that really work?" - and while the village setting would later become Miss Marple's homeground, Poirot does well in this one.

Okay, when it comes to Swedish editions of this novel, we've got a lot to talk about... First, this is the only novel of Christie's that wasn't published by Sweden's leading publishing firm, Bonniers. As I understand it, when it was offered to Swedish publishers, only two of Christie's novels had been translated (The Secret Adversary and The Murder on the Links), none of which had probably been tearing up the sales charts. Instead, this was picked up by a competing publisher, B. Wahlströms, who as you can see above have gone on to milk this novel to death. It is interesting to note, though, that the very latest edition is actually the same as the one we've seen for The Mysterious Affair at Styles. So maybe they have decided to align, or perhaps someone now owns all the Swedish rights to Christie novels.

Anyway, adding to this confusion, this novel has two different titles in Sweden. I said that the Swedish title for The Murder on the Links was the poorest ever, but it has stiff competition from the original Swedish title here: Hur gåtan löstes means How the Mystery Was Solved. Fabulous, no? No.

When the novel was published in the 40s, it received a new Swedish title, which has stuck with it since then. Dolken från Tunis (literally: The Dagger from Tunis) is also a much better one, better than the original English one, which I think is similarly bland to most of the other 20s titles.

Now let's move on to the covers, which are a mixed bunch. The first one is actually exactly the same one as the first British edition. It looks incredibly dated, and it's impossible to imagine a book today with that type of cover. As an exercise in nostalgia, it's fine, but not a favourite of mine. As for the cover from 1940, I think we have now established where Kenneth Branagh got his idea of Poirot's appearance from. If the Poirot depiction were better I'd like this a bit more.

If you've taken a closer look at the covers above, you've also seen that they are partly repeated over the years. Take the 1952 one, for instance. The same illustration appears on the covers from 1997 and 2002, though with different typesetting and colouring. The 50s one is definitely the best one of these three. I don't think it works anywhere near as well with the white and green of the later covers.

The 1959 cover is more in line with what covers looked like in Sweden around that time (see also the almost concurrent cover for Murder at the Vicarage), and I quite like it. Moving on, you can see another cover that was repeated, just with some design details changed. The one from 1964 is a bit more cluttered than the cleaner 1980s variant. The cover illustration gives vibes of a more hardboiled story, but at least it looks exciting.

And that's in contrast to the 1982 cover, which is the edition I have. Yeah, the dagger looks impressive, but why cover it with all that text? Bah. By 1995, the Suchet TV series is going strong, and therefore we need a tie-in cover, of course. This is the type of cover I hate the most.

Finally, let's take a look at the latest four editions. The one from 2005 has some design similarities to the 1982 one, though manages to both improve on it and make it worse at the same time. They've managed to separate the dagger and the text, but the dagger itself is just a silhouette and the font they've chosen is ugly. I also dislike that it's all in lowercase letters.

The 2007 and 2009 covers are a bit meh. The first one has a lot of flowers, while the later one at least manages  to indicate that this is going to be a mystery, with a dagger and a magnifying glass. And then we have the latest edition, whose covers I'm starting to warm to, funnily enough. They have the same style of design, and I like that they've managed to make the dagger part of the title. It's still not the most eye-catching of covers and doesn't scream "mystery!", but I'll try not to dismiss them out of hand henceforth.
Posted by Christian_Henriksson at 12:06