Agatha Christie 100 - The Murder on the Links

It is now time to take a look at the second Hercule Poirot novel, The Murder on the Links. It's one of the least spoken about in the Poirot series, perhaps because it isn't really outstanding in any way. But I was positively surprised when I read it. 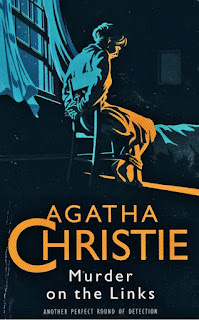 Hastings has just returned from the continent, doing his regular job (apparently he has one), and he finds that Poirot has received an urgent message from a millionaire living in France, urging him to come. But when the two arrive, it turns out that they are too late - his wife has been tied up in their bedroom, and the millionaire is dead after what seems like a botched attempt at abduction. When later another body is found on the premises, the mystery deepens.

Of the books I've re-read so far, this was the one I had the least memory of, though I did have an inkling as to the identity of the murderer, and it turned out to be correct. What we have here is a pretty good detective story, where one of the clues is very similar to one in The Mysterious Affair at Styles. Again, with Hastings as the narrator, we're always at a distance from Poirot, both because at several points in the story Poirot leaves Hastings at the scene of the crime, while he flits around trying to establish various things, and also because Hastings is so incredibly dim that he has no idea what Poirot is doing. As an aside, I didn't remember Hastings being this dumb, but I've had to revise my opinion of him...

The twists and turns towards the end are pretty good, and the surprising killer is well-hidden. If I had one complaint, it would be that it feels a bit as if Christie could have pinned the crime on several persons without there being anything in the cluing that contradicted it. But as I said above, I enjoyed this a bit more than I thought I would, and I will therefore rate this as 41 out of 100. Still below average for Christie, but a well-written mystery story that most other authors would have been proud to have produced.

In Sweden, this was the second Christie novel to be translated, and it was published in 1924, just one year after the British publication year. While the British title is bland enough, the Swedish title was the incredibly unimaginative Vem var den skyldige? (Literally: Who Was the Guilty One?). It is probably the poorest mystery title I've ever heard of.

All Swedish covers feature the killing dagger, though in quite different ways. The 20s cover is quite typical of its time. Fairly charming, but not great. The later 1941 edition has a horrible cover of Poirot lecherously watching a couple of dancing showgirls! I can't imagine Hastings approving of that depiction of his future wife. The 50s cover is amateurish, but at least not sensationalist.

Which means that again we're left with the Zebra series and the 80s Bonniers editions to pick up the slack. Unfortunately, the 80s one - the one I own - is one of the worst of that series. It's just there, really. The Zebra edition is better and clearly the most evocative, managing to sensationalise a scene that really isn't too exciting in the book. Too bad that this one wasn't published in Delfinserien. Since the competition is so poor, they could have had almost any cover and yet it would have been the best of the bunch.

So an average book with a less than average title (even more so in Swedish) and some decidedly unexciting covers. I kinda feel sorry for poor Murder on the Links, really.
Posted by Christian_Henriksson at 10:38