Agatha Christie 100 - The Murder at the Vicarage

So, time for our first Miss Marple book in this re-read. This was published a little later than the others so far (1930), so Christie is more assured as a writer by now. 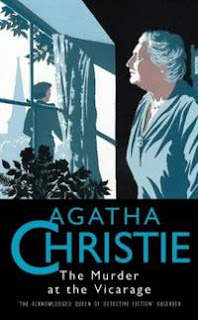 The cantankerous Colonel Protheroe has made enemies of all and sundry, and therefore it comes as no surprise when he is found murdered, shot to death in the vicar's study. Because of the Colonel's nature, there are plenty of suspects, but almost immediately his wife and her lover admit to the killing - separately! But there are inconsistencies in their stories, and any Christie reader will immediately guess that their confessions are not genuine. It is therefore fortunate that next door to the vicarage lives an old lady with a lot of common sense - Miss Marple.

I think one could call this Christie's first "standard mystery". She's beginning to hit her stride here, and from this point on and for up to 20 years she will be writing great mystery novels - some will push the boundaries of any rules you can think of, while others will just tinker around with the different building blocks that make up a mystery to confound the reader as much as possible.

As I said, this novel is the start of all that. It's very good, and even though I remembered almost all the big developments here, I enjoyed reading this story a whole lot. Miss Marple isn't really the character she would become in later stories, she is much more fearsome and more of a village gossip, like the other old ladies that we come across in this novel. There's nothing of the woolly old lady who can fool criminals with her innocent blue eyes.

I'd rate this a 78 out of 100. One of her finest mysteries, but there's still room for improvement before we reach the very tops of greatness.

Again, the Swedish title is a direct translation of the English title (Mordet i prästgården = The Murder at the Vicarage), so nothing much to discuss there. More interesting is perhaps the fact that this title wasn't published in Sweden until 1952, well after three other Marple titles had already been translated into Swedish.

Despite the fact that Vicarage had to wait quite a long time before being published in Sweden, it has had a whole bunch of different editions since then, with as many as four coming this century. If we take a look at the first edition, it has a rather humorous looking cover. It's very typical of Swedish 50s covers. Its main drawback is that it says very little about the contents of the novel, but I like it anyways.

Come the 60s, and Delfinserien has a pretty good-looking cover with the Old Hall front and centre - another one of Per Åhlin's creations. Nowhere near his best, but still preferable to many of the others here. The two Bonniers editions from the mid 80s actually belong to the same series, but as you can see, they switched illustrators before the second one. While the first one is fine, if a little nondescript, the second one, again by Leslie Quagraine, is awesome in every way. Again, perhaps it doesn't say much about the contents, but doesn't that cloud look wonderful? I just wish it was the one I owned. (I used to have the earlier 80s version, but upgraded to the Delfinserien one some time ago.)

The edition from the late 80s is a book club version, as you can probably glean from that cover, which is pretty awful. It looks like the cover of a vampire story, to be honest. As seen before with The Mysterious Affair at Styles, the 2000 version has a photograph. This one is evocative but a picture of a tree doesn't really spell out "village mystery" to me.

The large print edition from 2001 at least has the clock, which was an important clue in the story, while the latest edition at least continues the same abstract stylings that the other publications in this series have. Note that they've incorporated Christian crosses in the title, which is kinda nifty.

Before coming to the 2005 cover, I might need to explain that in Sweden, we always have a "Book sale" period in late February. A lot of books are published in special editions for this sale. And this edition is just such a one. To be honest, I think it's a fairly evocative cover, much better than it has a right to be. And it helps that it actually depicts something important to the story. If only it weren't so very dark.
Posted by Christian_Henriksson at 11:18