(This is a translation of the preface I wrote for this collection of John Dickson Carr stories.)

This volume is the first in a collection of three presenting all short stories by John Dickson Carr/Carter Dickson. All? Well, that depends on how you're counting it. It collects all stories that have been featured in a John Dickson Carr collection - however, there are some stories, mainly juvenilia that have only been published in obscure publications.

Such stories have not been included here, sadly. I've read a couple of the juvenilia stories, and they are quite representative for early Carr, though very few of them are actually criminous. Historical romances with some adventure is probably the best description of these.

But what is included then? Well, in this first collection all four stories featuring the French detective Henri Bencolin are present. Moreover, there are a set of stories with none of Carr's recurring detectives. In this volume, the focus is on Carr's supernatural stories and those that are set in historical times.

The four tales about Bencolin are all part of Carr's juvenilia. They were written in 1926-27 while he was studying at Haverford College and was just out of his teens. Their first publication was in the college's own magazine, The Haverfordian. It is clearly noticeable that Carr is not yet a master writer, though his talent is apparent. The stories are weighed down by their atmosphere, yet you can see a hint of the ingenuious solutions Carr would later be famous for. All are impossible crimes.

The first of these four is "The Shadow of the Goat". A man bets several of his friends and acquaintances that he can go into a room, have all the doors and windows locked, and yet disappear from within that room. They wait for fifteen minutes, and then a shot rings out. When they enter the room, no one is there. Meanwhile, a rival of this man is killed at his home several miles away.

The setup is great and the identity of the killer is a pretty good surprise, but it has to be said that the solution is fairly far-fetched and hinges on one of my least favourite tricks in the impossible genre.

"The Fourth Suspect" follows. A man's wife has eloped, and he decides to have it out with his rival. He and his policeman companion reach their house when they hear the sound of a gunshot. The rival is found dead, with all doors and windows locked, and yet no one else is found inside.

This is rather more clever than the previous story, though I'm still not convinced that the killer could have committed the murder the way he did without being noticed.

Then we move on to "The Ends of Justice". Roger Darworth and his cousin Tom Fellowes are rivals for a young woman, and Fellowes is also Darworth's heir. So when Darworth is killed in a room where the door was watched and there are no footprints in the snow outside the window, Fellowes is immediately arrested. But how could he have committed such a crime?

It is clear that Carr is improving as a writer with each of these stories. This has a wonderful setup, and most of the solution is pretty good (though Carr resorts to a similar trick to the one he used in "The Shadow of the Goat") . There is a good deal of melodrama, too much, to be honest, and that lets the story down a bit.

The final Bencolin tale is "The Murder in Number Four". This is set on a train in France where a man, after leaving the boat from Britain, is alone in his closed compartment. And when the train stops, he is found dead, even though two men were standing in the corridor and didn't see anyone enter the compartment.

Carr continues to improve here, offering an extra impossibility and a well-hidden killer. And of course a train setting is always welcome. It's all quite highstrung, as always in Carr's early works.

"As Drink the Dead..." and "The Dim Queen" are also from this time period. The former is strongly reminiscent of the Bencolin tales, but is more of a vignette than a full story. It concerns one of Carr's favourite impossible crime subjects, the goblet that kills people who drink from it. The latter is a less successful romantic story where the reader will probably ask himself whatever that dead man at the beginning of the story had to do with anything.

The following six stories are all from Carr's heyday, the mid 1930s. Carr was partial to reusing certain situations, and the short stories "The Man Who Was Dead" and "New Murders for Old" are clearly the same story, where the latter is a somewhat more rounded version of the former, allowing Carr to get a bit further into the background of the mystery. In these stories, a man is sent on a voyage that takes a whole year, but when he returns home, he reads in the paper that he's recently died... 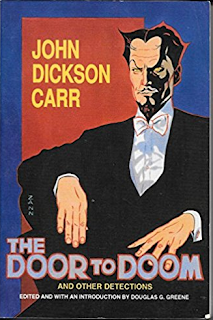 "The Door to Doom" is like the previous two stories a very atmospheric tale where the supernatural elements never get a rational explanation. In this case we have a man who stays at an inn in France, but the innkeeper's daughter warns him that his life will be in danger during the night.

As opposed to most of Carr's works, which take place in Great Britain, "The Other Hangman" takes place in 19th century USA. It is a very clever story where the means of murder is less interesting than the subtleties Carr engages in. A man is in court for killing his partner in crime. He is convicted of the crime, but then new evidence comes to light.

"Blind Man's Hood" gives us a story where a young woman is home alone, but her house burns down and she is found killed with multiple stab wounds. An impossible crime with a simple and ingenious solution.

In "Persons or Things Unknown", the story we get told is about a man who is killed by some kind of knife or sword in the presence of his fiancée and his rival for her affections, but the weapon cannot be found. The solution is top notch, and a variation of one of this genre's most famous short stories.

The above two stories have similar starting points - the crimes are set in historical times and then retold for an audience in present day. The murder methods are quite different, though, and reading one story won't spoil the other  Both have certain supernatural elements, though they are more accentuated in the former.

The two final tales are also historical mysteries. "The Gentleman from Paris" is an homage to Edgar Allan Poe's "The Purloined Letter" where a will was written by a woman whose room was never entered, and yet the will cannot be found the next day. And like that earlier story, one has to question how clever those policemen searching the room really were.

Meanwhile, "The Black Cabinet" is mainly a romantic adventure story where a young woman is preparing to assassinate the French emperor Napoléon III. The mystery in this story is just a minor feature - though there is a surprise at the very end.

Carr's early stories are drenched in melodrama, but it's interesting to see him hone his craft and how he improves both his writing and the solutions to his impossibilities. The Bencolin stories are the most interesting, both because they feature one of his recurring detectives and because they are simply better told.

As for the later fiction here, some of it is among Carr's very best. The two final historical stories are among the least interesting here, but all the others are very enjoyable.

The impossible tales that I've chosen to include in my project are "The Murder in Number Four", "Blind Man's Hood" and "Persons and Things Unknown".
Posted by Christian_Henriksson at 20:58