I don't know if I'd call Commings an unsung hero in the impossible mystery genre. He was for a long while, but he's had a bit of an upsurge over the last few decades. Still, he should be much better known.

It's unfortunate that this volume, wonderful as it is, is still the only collection of Joseph Commings's stories. His stories are not all top-notch, but their overall quality is still better than most writers. What can be said about "Banner Deadlines" is that it's a good cross-section of stories featuring the irascible senator Brooks U. Banner.

This volume, like so many other worthy short story collections, was published by Crippen & Landru. According to the bibliography towards the end of the book, there are still nineteen uncollected Banner stories. Is it too much to wish for that C&L publish a second volume with these nineteen tales? 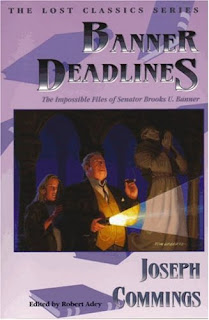 This volume gets under way with "Murder Under Glass", where the good senator is invited to a dinner party. A few days later, his host is found murdered inside a glass dome which is so heavy no human could ever lift it.

The impossible situation is to die for - hrm - but the solution hardly lives up to that. It's easy to see that Commings was still heavily influenced by pulps here. Characters use typical slang and there's an urgency and haste to everything. The leg bit - if you've read it, you'll know what I mean - is a pretty tired way of explaining impossibilities. So, all in all, I was a bit disappointed, but the impossibility itself is still impressive.

We move on to "Fingerprint Ghost". Banner overhears a conversation in his club about a doctor who has been stabbed to death in his office. A medium promised to bring back his ghost to name his killer, but didn't succeed. Now a magician has challenged the medium that he can do exactly the same as the medium, with everyone present sitting in straitjackets to prove that he has no accomplice. Of course, the magician is murdered during this second seance...

You've got to hand it to Commings, he knows how to create great impossible scenarios. At the same time, he's still not perfected his ways to explain these scenarios. Again, I felt a bit let down by the solution he offers here. I especially question why the murdered man wouldn't actually call out when he realised that something fishy was going on. Commings just skates by that bit and handwaves it, hoping the reader won't catch it.

In the next tale, "The Spectre on the Lake", senator Banner is holidaying by Mad Moon Lake, and he takes an interest in some of his fellow guests. Rightly so, because one day two of them row out to the middle of the lake and they are both shot in full sight of all the other guests. As you've guessed, no one could have shot them.

Another lovely set up here, and this time Commings gets it all to work. He plants the important clue out in the open, and I think the solution would work in real life as well. If I have to complain about something, it might be the motive, which was a bit flimsy, but that's just a minor thing.

"The Black Friar Murders" is one of the longer stories in the collection . Banner is on another vacation - this time it's Thanksgiving - and is travelling by train to visit an old friend. One of the guests seems to have got lost while visiting an old cloister, and everyone goes there to collect her. While there, some of the party see the ghost of an old monk vanish from a cell, and of course the guest is found dead.

This is a more elaborate setup than we've seen previously, and the pulpy characteristics are very much to the fore - especially in some of the early train scenes where Banner meets a young woman. Holy smokes, that's some dated conversation. But that doesn't matter in the end, because the whole impossible situation in the cloister is great. The solution works well and we get a very unlikely killer. It's all very nicely done.

"Ghost in the Gallery" has a great opening line: "That afternoon Linda Carewe poisoned her husband." And yet, just a few minutes later she and her lover see the supposedly dead husband in an old gallery. They see him standing in an office, and when they enter, a woman is lying dead inside.

Another great impossibility, and the only real drawback here is that there are almost no suspects to choose from, so in the end spotting the killer is not that hard. But this is on the whole a truly successful story. It seems Commings has hit his stride by now.

And it continues with "Death by Black Magic", where a magician is showing Banner how to vanish from a cabinet. But he never appears again, and once he does it's not as a living being.

Having magicians in an impossible mystery almost always elevates them. And this is no exception. We get a wonderful story here with an impossible vanishing which turns into an impossible murder. And it's all tied up wonderfully with a perfect explanation.

In "Murderer's Progress" we return to senator Banner's club where five men hatch a plan to fool Banner into the next century. They device an impossible situation of their own, where one of them disappear after having been seen chatting with a friend in a closed room. But the plan backfires when another one of them is found dead at home.

It's a pretty good set-up, admittedly. I do get a bit wary with this type of impossibility which hinges on a witness not seeing something that should be fairly obvious. On the other hand, I do think that Commings does enough with the whole description that the reader should also pick up on the crux of the impossibility. So, it's still a good story, it just feels like a bit of a letdown since there have been several great stories before this one.

"Castanets, Canaries and Murder" follows, and here we have a man killed in a film studio. He's stabbed in the back, and the whole thing is caught on camera. No one is seen near the murdered man.

The explanation is very simple, but also a bit technical. So a bit similar to for example Arthur Porges's stories. The main problem is that there is almost too much background here - the story feels a bit padded out, and the impossibility doesn't occur until the final few pages of the story.

"The X Street Murders" is possibly Commings's most famous mystery. A woman enters an office with an envelope she's going to deliver to the occupant. Two visitors in the anteroom see her speaking to him, but suddenly three shots ring out. The man is murdered, but somehow the recently fired weapon is found inside the envelope.

Now, without all those trappings above, this mystery would be as easy to solve as... I don't know. It would be super easy. But that's the difference between a bad and a good story. Here we get to go through a couple of extra impossibilities just to get to the crux of the matter. One thing I don't like is lying witnesses, though. That detracts a bit from the greatness of the rest.

Banner's automobile breaks down at the beginning of "Hangman's House", and he is picked up by a party of four. Unfortunately, the weather is so bad, they have to stop. Luckily they find an old mansion where they can seek shelter. Coincidence or not, it turns out that the mansion used to belong to one of the four passengers. Even more coincidentally, he soon turns up dead - hanging from the old chandelier in the huge ballroom. And there are no footprints leading out to him...

It's all a bit coincidental this, as you probably gathered. The crime also has one of the more ludicrous solutions I've seen for a while. I said this about one of the Hal White stories in an earlier post - "it's awesome and super stupid at the same time". That description fits this story perfectly as well.

In "The Giant's Sword", a wealthy widow buys an old painting from an art dealer. However, when it's delivered to her, it turns out to be fake. Unfortunately, when she returns to have it out with the art dealer, he turns out to be dead in his office, with a sword plunged so deep into his chest, it's impossible for a human to have done it.

A pretty good impossibility here, and the solution is quite nice as well. Again, the only minor drawback is that there are too few characters in the story so the killer feels fairly obvious, but as I said, just a minor quibble.

"Stairway to Nowhere" was written in collaboration with Edward D. Hoch, which immediately raises hopes for a top impossibility. What we get is a young man who sees his girlfriend go in through the door to her house. He hears her walk up the stairs, but when he follows, he cannot see her and she is nowhere to be found at the top of the stairs.

Those hopes were not dashed. This is a great story with a great impossible disappearance, and a wonderfully simple explanation that just turns everything around. The rest of the plot of the story isn't quite as good - there's some stuff about museum theft where the culprit is rather easily spotted - but until the impossibility is solved, the reader just can't put everything together.

In "The Vampire in the Iron Mask" we get a story set in France. Banner travels there to present a medal to an old underground fighter, but what he gets is an impossible mystery where it seems a vampire with an iron mask has killed a young boy who was in a cemetary with two friends - at least, that's the story the two other boys come up with. There's also an added impossibility where someone seems to have entered one of the closed tombs.

I wasn't particularly impressed with this story. First, the whole vampire bit is a bit hokey, and the explanation for the mask is just bad. And then the explanation for the young boy's death is a pretty big disappointment as well. The second murder and the solution to that is what saves the story to some extent, because that bit is clever.

The final story here is "The Whispering Gallery". The Great Zeno challenges senator Banner to a magician's challenge, where both men put on a show for an orphanage full of kids. The next day, Banner gets a call from the house's owner who tells him that someone has shot a bullet through a portrait, but when Banner gets there he has disappeared.

Now, that's more like it. Lots of twists and turns on the way and a pretty darn good impossibility with a simple explanation that just might be spotted by the wary reader. Commings does his best to hide it by piling on more and more stuff, and largely I find that he succeeds.

Commings is great att creating impossible situations. He's just a tad worse at creating explanations that work just as well. But in those instances where he does - and most of these stories are such instances - you'll just marvel at the whole thing.

There are a few minor disappointments here, and the chief one is "Vampire", but just like Edward D. Hoch Commings is a master at creating something worthwhile in each story, so I think in the end I will use all of them in my project.