(This is a translation of the preface I wrote for this collection of Ellery Queen stories.)

This volume departs from the principle of presenting the stories chronologically - at least with respect to when they were written! "Calendar of Crime", which this volume copies, is the only Queen collection that has an overarching theme. And that theme is that each tale takes place in a different month. I've therefore decided to present the stories in the same order, from January to December.

All twelve stories were produced during a five year period (1946-51) and are all based on radio manuscripts written by the authors during the war years, when Ellery Queen was a great success over the airwaves. Like the previous collection, the quality of the stories is extremely varied - there are examples of the authors' very best works and the very opposite as well.

In this collection, we get a new acquaintance in Nikki Porter. Nikki is Ellery's secretary, and for some reason the authors themselves never really decided on how Ellery and she crossed paths. The novel "There was an Old Woman" gives us one encounter, but that doesn't at all fit with what we're told in the later novel "The Scarlet Letters". No matter, Nikki is a pleasant acquaintance, though it is quite obvious that she was introduced to hopefully increase the female interest. When it comes to Queen's short stories, these are the only ones where she's present.

The authors' period 3, where characterisation is of greater importance, began in 1940 and lasted until around 1960. Apart from Nikki Porter, another new acquaintance is the American town of Wrightsville, though this setting is not used in any of these stories. Ellery the detective is a more humanised character, but the authors have left the worst amorous excesses behind them and the focus is more on the mystery itself. 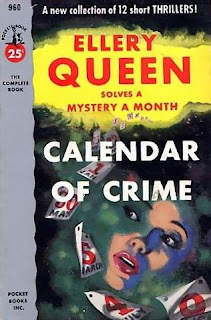 Our January story is "The Inner Circle". This circle refers to five well-known men who used to belong to the same university society, and it seems that someone is killing them off, one by one. Ellery gets involved to try to solve this mystery.

The solution is based on one of the authors' favourite tricks (to compare different things and find out either what they have in common or what differentiates one of those things from the others). It takes a little while before the story really gets going, but when Ellery starts explaining his conclusions it takes off. A pretty good start.

February's "The President's Half Disme" doesn't concern a crime. Instead, Ellery has to match his wits with the first President of the USA. Washington hid an old coin, and Ellery has to interpret the clues he left behind.

The solution isn't particularly hard to get if you know a bit about US history. Otherwise, another all right story, well worth reading.

Before the mid 50s all Americans had to hand in their tax return on March 15, and this is where "The Ides of Michael Magoon" starts off. Someone's stolen the tax return of a colleague of Ellery's, and before he reaches the solution we get kidnappings and murder.

For some reason, it feels that this story should be better than it actually is. We do get a pretty good least likely suspect thing here, but it all seems a bit far-fetched.

With "The Emperor's Dice" we've now reached the month of April, and Ellery's father is about to visit a childhood friend. He brings Ellery and Nikki along, and when they arrive it turns out that both parents have died in suspicious circumstances.

The story tries to set up a terrifying atmosphere, but it's mostly just baffling. Coupled with one of the worst examples of a "dying message" this story is an incredible flop.

"The Gettysburg Bugle" is our May contribution. Ellery has to explain how a couple of civil war veterans have died while blowing the titular instrument.

This is clearly better. The authors return to one of their favourite subjects, American history, and Ellery draws a couple of clever conclusions. A step forward.

Many people get married in June, and therefore "The Medical Finger" is about a wedding where Ellery (and NYPD) is trying to stop the bride's previous boyfriend from doing something stupid.

This might be the only story where it isn't Ellery who manages to solve the problem (instead, his father does so). And it's a pretty bad story at that. Too easily seen through. 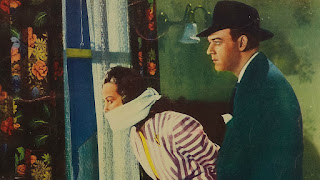 It's the peak of summer in "The Fallen Angel", and Ellery has to help a friend of Nikki's. She's married a man who is several years older than she, and he is subjected to an attempt at his life.

The unskilled culprit is relying on a plan which is based on stuff that is impossible to control, and I guess it's only fair that Ellery manages to catch them. A tiny bit better than its predecessor.

In "The Needle's Eye" (where the connection to August is somewhat fuzzy), Ellery has to hunt a treasure on an island, and before the story is over he also needs to solve a murder.

This is much, much better. A clever and enjoyable story. Though the villain seems obvious there is still quite a surprise towards the end.

School starts in September, and when a university professor doesn't return from his summer holidays, Ellery needs to find out what's happened in "The Three R's".

This would have been a much better story had the authors left out the final twist. Even so, everything feels a bit artificial. An all right story, nothing more.

In "The Halloween Mystery", Ellery is going to a party with Nikki, and of course a murder takes place in a completely dark room.

We get a solution that is at the same time reminiscent of the one in "The Adventure of the House of Darkness", and different from it. It could have been an impossible crime if the authors had wanted to, but that's not the direction they decided on. I'd question how the murderer actually knew that there would be an opportunity to commit this particular murder, but this is still one of the better tales of this volume.

"The Telltale Bottle" takes place during Thanksgiving. Nikki is volunteering to hand out baskets of food to the needy, and Ellery tags along.

At least the authors again get to hold forth on American history, which is the best part of this story. The mystery (a potpourri of drug dealing, innocently imprisoned people and murder) hinges on so incoherent a chain of coincidences and randomness that the reader will inevitably be incredibly disappointed.

In "The Dauphin's Doll", Ellery needs to figure out how master thief Comus manages to steal an almost invaluable doll though it's been in view of several guards the entire time.

After the previous story, we're lucky that we get one of Queen's very best tales as the final one. Impossible crimes are not one of the more common themes for the authors, but this is an inspired success in every way.

So, as I said, a bunch of highs and lows. The lows are oh so low, so so very low. April and November, I'm looking at you. On the other hand, December gives us a true classic of the genre. And there are several other good to great stories, so on the whole this collection is definitely better than average.

The theme works fairly well in most instances and that's obviously another positive thing about this collection.

There's one impossible tale here, and it's awesome, so obviously it'll be featured in my project.
Posted by Christian_Henriksson at 12:23