Agatha Christie 100 - The Mystery of the Blue Train

Another novel written in the wake of Christie's personal problems during the mid 20s. It is fairly obvious that it's not a major work of hers, though it has its charms. 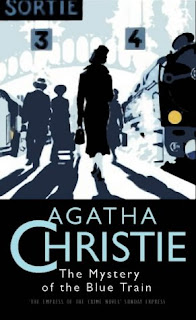 The American millionaire Rufus Van Aldin has bought a precious set of jewels for his daughter Ruth. Meanwhile, young heiress Katherine Grey has been invited by family to visit at their place on the French Riviera. Both of these young women are travelling on the titular train towards the south of France, but only one of them will arrive. It is fortunate that on the same train is a certain moustachioed man with an egg-shaped head...

The Mystery on the Blue Train is a novel expanded from the short story The Plymouth Express. The new bits are the least successful parts of the story, with some international intrigue surrounding a certain criminal mastermind called Monsieur le Marquis and a shady Greek businessman and his daughter.

This has a reputation as a minor work of Christie's, like its predecessor The Big Four. Personally, I think this one is much better than that hodgepodge. Parts of it is certainly due to my love for train settings. I do recognise that this is hardly anywhere near Christie's best novels, but it has a lot of charm. Poirot acts like Poirot should and Katherine Grey is a nice creation.

The novel also features a number of firsts - Mr. Goby and Poirot's valet George make their first appearances here. More significant is that the village of St Mary Mead, where Miss Marple lives, makes its debut here, though we meet neither that worthy lady nor any of the other cast from The Murder at the Vicarage. Except for possibly the vicar, but he and his wife are described very differently here. Maybe it's a different village with the same name...

I'll rate this a 38 out of 100. Far from Christie's best work, there is still a lot of things to like in this novel.


Another minor Poirot title, another novel that took a long time to make its first appearance in Sweden. The Swedish title is yet again a literal translation of the English title, which actually is the first Christie title chronologically that I find somewhat appealing, unlike the earlier, fairly generic ones. Yes, it is the fact that "train" appears in the title that makes it appealing.

The 1977 edition features the all-important necklace on the front, but is a bit dull overall. As for the late 80s one, as usual I like Quagraine's work, and the train with the smoke billowing is a beautiful detail. This is the copy I own. (To be accurate, this is the paperback cover from 1991. The earlier hardcover version has some differences in typography, but otherwise the cover is the same.)

But the cover from 2014 is actually just as good. Using a blue background is perhaps a bit on the nose, but again I like the depiction of the train, and I think losing Poirot from the cover is an improvement. I'm warming to these new editions, aren't I?
Posted by Christian_Henriksson at 11:53