Agatha Christie 100 - The Body in the Library

The second Miss Marple novel wasn't published until 1942, and by then Christie was firmly established as one of the foremost writers in the business. 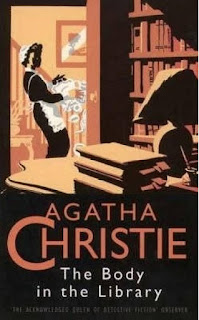 Colonel and Mrs Bantry wake up to the terrible news that a young woman has been found dead in their library. Almost immediately tongues begin to wag, and Mrs Bantry asks for assistance from their good friend Miss Marple. It is soon established that the dead woman was Ruby, a dance hostess at a resort hotel a couple of miles away, and Mrs Bantry and Miss Marple decide to take a room there.

This might be one of the shortest Christie novels around - it was my quickest read so far. Miss Marple has now become the seemingly woolly-headed lady that we expect her to be, though there is still a heavy focus on how she constantly sees the dark side of everyone and everything.

It's a fine mystery, as one would expect from Christie during this time period. But that doesn't mean that it's without flaws. The ending is quite abrupt. We're almost still in the middle of the investigation, and then suddenly revelation after revelation comes, wrapping everything up quite neatly. There's not much clueing to give the reader a fighting chance of solving this along with Miss Marple.

Overall, this is still very readable and I'd place it just a bit below the average Christie - my rating is 48 out of 100.


Though the second Miss Marple novel overall, this was the first to be translated into Swedish, and we made a minor change to the British title when translating it: Liket i biblioteket literally means The Corpse in the Library, but it's also true that using the Swedish word for "body" would sound very awkward, so I don't think there was any other reason for that change.

Several of the covers feature the dead body, with two instead choosing to focus on the dancing that is central to the story. The 40s and 50s covers are quite similar in what they choose to depict even though they don't look all that similar to each other. For once, I prefer the earlier cover to the one from the Zebra series - in the latter the body looks a bit too cartoony for the surroundings.

Delfinserien has two different covers. The earlier one, which is the one I own, is again focused on the body, very minimalistic but quite striking. The later one looks very sinister with all those jewels and the foot with the painted toenails. For once, it's not only similar to one of those Fontana covers - it IS the Fontana cover!

Bonniers 80s editions also have two different covers. The first one is very cartoony, though it seems it is based on a painting by J. C. Leyendecker. The one from 1988 is also cartoony, though in a different way. I actually like that one better, though I'll readily admit that it could have been used for almost any Christie novel. The cover from 1990 is from the centenary of Christie's birth, and I think it is the same one used by the British contemporaneous editions, or at least a variation thereof.

We have another photo on the 2000 edition, which seems to be an image of Ruby's dancing feet, though it could actually be meant to have been taken in the library instead. It's one of the better covers from this edition. And then we have the 2015 cover, which I think is fairly dull. A couple of bloodstains on a chequered background does not really do much for me.
Posted by Christian_Henriksson at 11:53